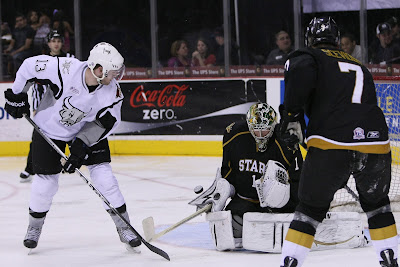 The Stars finished their season out on the road in San Antonio this afternoon, falling to a Rampage squad that is not going to the postseason in their last home game. San Antonio only needed one goal to get past Texas as the Stars finished their regular season campaign with six scoreless periods. Tyler Beskorowany stopped 27 of 28 in the game. With the loss, Texas is now set to play Milwaukee in the first round of the Calder Cup playoffs.

Viktor Tikhonov had the game's only goal just six minutes into the first period. Tikhonov worked his way around the offensive zone, outmaneuvering many of the Stars skaters before beating Beskorowany from the high slot through traffic. San Antonio led the shot count through the first and the entirety of the game.

Texas could not get on the board despite six power play opportunities in the game, including an extended 5-on-3 set. Coach Gulutzan was trying some different lineups on the special teams units though, so the Stars had a less cohesive group on the ice for those times. Luke Gazdic, for example, picked up PK time while newcomer Scott Glennie was out on the PP.

The Stars now rest for tomorrow, have media day on Tuesday and will leave that afternoon for Milwaukee to face the Admirals. I'll have the schedule in a separate post to come in a bit.