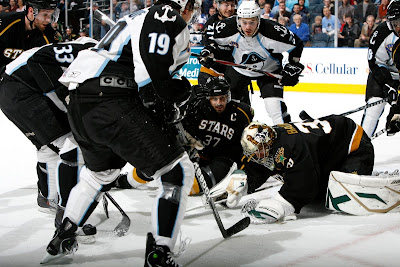 Bachman had 43 saves on 46 shots in the game. (Credit: Scott Paulus)
After last year's long playoff run, the Texas Stars season ended far too early for their liking tonight in Milwaukee. In the longest game in Stars history, Milwaukee defeated Texas 10:42 into double overtime on a rebound goal from Mark Van Guilder. The crowd of 3,339 Milwaukee fans cheered on their Admirals who will now face the Aeros in the second round.

Milwaukee was the one getting the early start in this one with a rebound goal on the third try from Mike Bartlett. The goal, just 4:20 into the first period, set Texas in an early hole. Milwaukee and Texas both had a lot of shots in the period at 15-12 for the Ads, but no more scoring was seen in the frame.

At near the same time in the second period, it was Colton Sceviour with his first goal of the playoffs to tie it up with the first. Dan Spang and Ray Sawada assisted on the power play tally which came with Texas on the PP for only 30 seconds.

Early in the third it was Milwaukee regaining their lead with Andreas Thuresson getting what was also his first of the playoffs. Travis Morin decided that Texas would not go quietly however and evened things up at two with a nice backhand snipe. Ray Sawada had his second assist of the night on the goal and Ondrej Roman also added an apple, his first point of the playoffs. The Stars held off a late power play from the Ads and took the game to overtime for the third time in the series.

Texas seemed to have all of the control in the overtime period, outshooting the Ads 18-6 through the two overtimes. In the end, it was a rebound goal from the stick of Mark Van Guilder that beat Richard Bachman just under 11 minutes into the 5th period in the game.

I'll have more thoughts about the season as a whole as we go through the next few days. It takes a little while to gather things up at the end of such a long season. Thank you so much for reading this season, and I look forward to an exciting summer of signings, rookie camps and prospects and a new season in September.