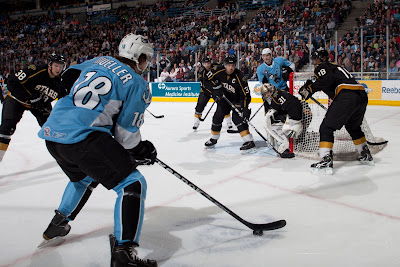 At the end of the second, this looked like a tight one, but the Texas Stars turned it on in the third period to win going away. It was a 5-2 final over the visiting Penguins, and Tanner Kero scored his second pro hat trick in the affair. Kero had a slow start to the year but has come on with goals in the past two games and five total on the season.

"Definitely a slow start personally," he said. "[We're] just playing better as a group, and the personal success is going to come as the group starts playing better so it's been a good little run here and we want to keep going with it."

It wasn't the cleanest game for either team. Some nights are just like that. "You earn your bounces and I wouldn't necessarily say we've earned them tonight," noted head coach Neil Graham. "At the end of the day, we will take two points [and] we'll loo…