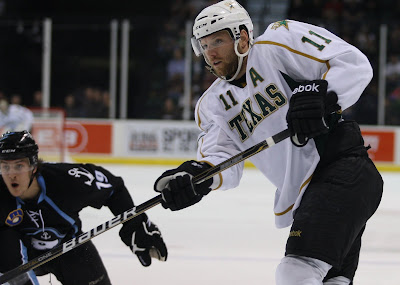 The Milwaukee Admirals evened up the West Division semi-final with the Texas Stars tonight in Cedar Park thanks to a strong start and a great power play effort. The Stars, who chipped in a power play goal themselves, got in an early hole at 1-0 and never led in the game. Unlike last night, they could not bring the game back to even by the end of sixty minutes. "One thing we need to focus on is our starts," said Greg Rallo.

Coach Gulutzan echoed the same sentiment, "If you have to chase the game all the time because you aren't coming out, then defensive teams know how to play defensive games. You'd like to get the lead and force somebody out of their comfort zone."

It was Texas out of their comfort zone early as Gabriel Bourque scored his fourth of the series on the power play fourteen minutes in. Roman Josi found Bourque in front of the net for the 1-0 lead. Mueller had the second assist on the goal.

The Stars would even it up in the 2nd with Scott Glennie's first professional tally. "I just threw a puck on net and went and got the rebound," said Glennie. The rookie winger collected his own rebound and picked the top right corner to beat Smith for a 1-1 tie. Taylor Beck would ensure that Milwaukee stayed in the driver seat on the power play just six minutes later. The oft-penalized Grant Lewis found Beck on the back-door with the man advantage, giving the Ads winger a tap-in tally to make it 2-1.

Milwaukee extended their lead in the third period with what would ultimately be the game-winning goal. Mark Van Guilder chipped in his first of the playoffs on a rebound to make it 3-1 just three minutes into the period. "I think it was the third goal that really hurt us," said Coach Gulutzan. "We made a turnover in our zone that put us in a hole."

The Stars would get one more but it would not be enough. With Johnson and Van Guilder in the box, Greg Rallo cut the score to 3-2 with a fine one-timer from his usual spot in the left-wing circle. Gagnon and Spang assisted on the goal. However, Gagnon would take a penalty during the remaining power play time to take Texas off the man advantage. Texas would ultimately come up short with Bachman on the bench as Milwaukee forced Game 6 back at the Bradley Center with the win.