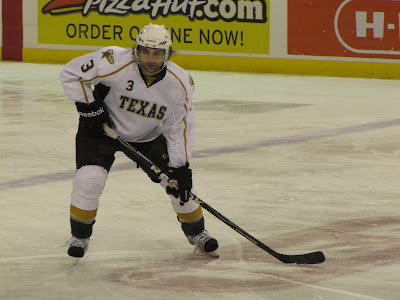 Dan Spang in an October 26th game against Peoria (Credit: Brian Hackert)
Texas Stars defenseman Dan Spang will head back to Europe next season according to reports from EuroSport.com today. Spang, who played with Nuermberg Thomas Sabo Ice Tigers in the 09-10 season, will join the Elitseiren's Vaxjo Lakers next year along with former OKC Baron Brad Moran.

Apparently, Spang was on the radar for the team in January. They tried to snipe him away but there were some visa issues. Here is a roughly translated quote from Lakers GM Henry Evertsson: "We chased him back in January when we were looking slopes before the transfer window closed. But first, there were problems with his double pass, and the price tag was too expensive."

Spang finished the season in Texas with 10 goals and 27 assists in 77 games played and added four assists in six playoff games. Spang was going to be another member of an already crowded blue line and might have seen the writing on the wall with regard to his prospects in Austin with all the Dallas D prospects coming in.

"A little inconsistent, he can be described as both a great talent and a late bloomer. Spang was drafted as a young man already in the second round of the San Jose Sharks, but was immediately after it is perhaps not quite the developments all hoped for. However, he has the past few seasons done very well, he comes to us after having responded to a real gun away season in the AHL."