Season Recap: Who Was The Most Improved Player?

Posted by Stephen Meserve on May 23, 2011
In recapping the season, today we seek to answer the question: Who was the Texas Stars' most improved player this season? For this one, I chose players who spent most of this and last season with Texas. I'll present the case for a few different folks and let you guys fight it out in the comments, on the Twitters and on Facebook. 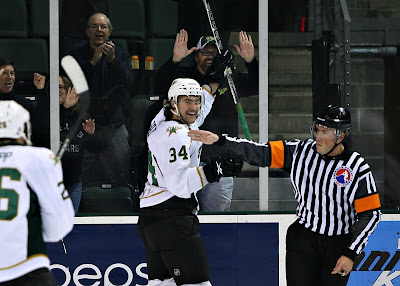 Luke Gazdic scoring the 2nd of his nine goals on the year in a November 30th game against the Oklahoma City Barons (Credit: Ron Byrd)
Gazdic's rookie year was unfortunately marred by injury at times with shoulder issues causing him to only play 49 games of 80 and miss the playoffs after surgery. Luke played 72 games in the 2010-11 campaign and five of the six total playoff games. He improved his scoring from 3-1-4 to 9-8-17. Gazdic also scored his first home goal of his professional career this year. Surprisingly, all of last year's goals were scored on the road, robbing fans of the ability to cheer "Luuuuuuuuuke!" as the goal horn sounded. Meanwhile, he lowered his penalty minutes from 155 to 110 this season.

If you were to compare Gazdic's game between this season and last, you would see a jump in confidence and skating ability. It seems like there is still some question of where to place him. Does he go in front of the net or should he be sharpshooting? Additionally, Luke is still working on the defensive side of his game with a minus-3 this year despite 17 points.

Gazdic also picked his spots more this year in terms of dropping the gloves. As hockey fans will tell you, there is a strategy to fighting. Much to the chagrin of some of the more casual fans, Gazdic didn't always drop the gloves, but there was always the threat and that was enough to keep the other teams in check many nights.

That physical presence was enough to open up some room for other players on his line at times. When paired up with Cody Chupp and Sean Backman, the trio tore a hole through teams that didn't expect scoring prowess from a fourth line matchup. Chupp and Gazdic banged bodies in the corners while Backman and the defense took advantage of the wide open space to score goal after goal.

The line was eventually broken up, but it showed a glimmer of possibility. Can Gazdic continue to grow to become the sort of player who opens the ice for skill guys? Would a line with Gazdic, Rallo and Morin be on the table? It depends on Gazdic's ability to keep up the pace as well. He took large steps in his skating and passing ability but still needs more. Continuing to work on his defensive game will make him even more indispensable. 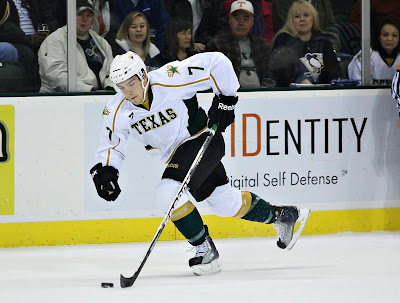 Colton Sceviour in the Stars December 7th game against the Manitoba Moose (Credit: Ron Byrd)
After the unsuccessful campaign for the Calder Cup in 2010, Colton Sceviour was one of many Texas Stars at the Stars' development camp in early July. I managed to catch up with him there and ask him what he wanted to do in his sophomore year. Sceviour wanted to be the kind of player who was trusted to be on the ice in every situation, whether even, up a man, or down a man.

That is exactly what Sceviour was to Coach Gulutzan this year. The second year pro was out on the penalty kill and the power play regularly for the Stars. He upped his offensive numbers by 10 points from 9-22-31 to 16-25-41 and appears to have more to give. Colton centered a crash-and-bang energy line for Texas with Tousignant and Sawada for much of the year. His plus-minus dropped, but this is because he was called upon to take more defensive zone faceoffs and placed in more critical situations. He was still positive at plus-4, so it's a good sign regardless.

The optics were just good on the young forward, who is officially listed as a right winger but played center for Texas most of the year. He appeared more confident and really had his game going toward the end of the year, earning a callup to Dallas to play against the Flyers amid an 11 point March campaign.

What's next for Colton? Dallas has told him that they don't expect him to be a top-six guy for them when he comes up. He will continue to work on that defensive game for sure with more penalty kill responsibilities and tough D-zone faceoffs. The importance of a gritty 3rd liner who can kill penalties is pretty large as shown through current Dallas Stars such as Steve Ott and Adam Burish.

So what do you think? Agree or disagree? Did I miss someone? Let me know in the comments, @100degreehockey on Twitter or on the Facebook page.
analysis