You Should Learn to Play Hockey 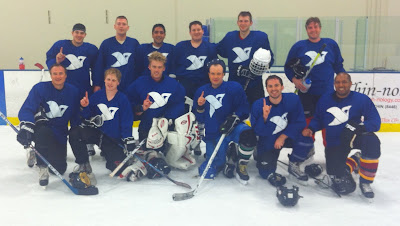 I don't usually like to repost, but this was an important one from back in the day. This summer marks my two year anniversary of learning to skate and starting to play hockey. Promoting not only the watching but also the playing of the game of hockey in Austin is incredibly important to me. So with that said, I give you my post on learning to play hockey in Austin. For the record, I am much better at backwards skating now and I don't fall down much anymore either. I've played three seasons now in the draft league as well.

I'm incredibly proud to say that I am a hockey player. I didn't get started when I was 3 like most professional players. I couldn't even skate before I got started last June. I took the Learn to Skate classes at the Chaparral Ice Center here in Austin for a few months and then jumped into the learn to play classes on Sunday nights at the Northcross Mall location. I have loved all of my time spent there. Hockey is an amazing game to watch and an even more amazing game to play. I've started in a mixed league, and I'm looking forward to joining the summer C league. I play drop-in hockey any time I can and go to stick and pucks as much as my schedule (and wife) will allow.

My point in this post is not to regale you with my story of hockey. It is to inspire you.

Hey you! Yea, you. I've seen you at the rink. You go to the drop-in games and just watch from behind the boards. You've even shown up to watch the learn to play class a few times. Maybe I've seen you at the public skating sessions. We might have talked even on the ice while we skated.

You asked me about how I got into hockey, and I tell you about how easy it was to learn thanks to the resources here in Austin. I tell you about how nice every single person I've ever worked with has been. And still, I don't see you on the ice at learn to play. You aren't there at drop-in. You haven't joined the league. It's not the 'right time'. You aren't sure if you're ready.

Guess what? You're ready.

I've watched too many hockey friends sit on the sidelines waiting to start playing, hovering at drop-ins and hanging out in the pro shop, waiting to enjoy the greatest game on this earth for themselves. Don't be intimidated. I'll tell you a secret. I still can't skate backwards very well. I fall down a lot, too. But no one cares. We are all on the ice to play this great game. And you should be out there, too.

Please, if you want to learn to play hockey, do it. Step up right now and say, "I'm coming to the Saturday morning learn to skate class this weekend" or "I'll be at the Sunday afternoon learn to play class". Step up and be a part of the best game on the planet, because you're ready.
hockey in austin