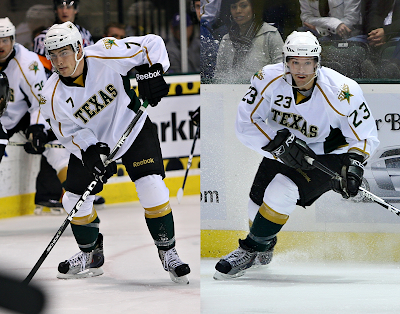 According to Mark Stepneski, the Dallas Stars have re-signed center Travis Morin and winger Colton Sceviour to two-way deals for the 2011-12 season. Both players spent the majority of the season with the Texas Stars. Morin would have been an unrestricted free agent on July 1st, and Sceviour a restricted free agent.

Sceviour, Dallas's 4th round draft pick in 2007, saw action in one game against Philadelphia this season, breaking his streak of playing in every Texas Stars' regular and postseason game. Colton had a great year in his second professional season, scoring 16 goals and adding 25 assists in 77 games.

Morin had a spectacular season, being selected as a starter in the AHL All-Star game but missing it due to his first call-up to the NHL. Morin played in three games for Dallas this year, recording no stats, but clearly making a strong impression on leadership there to ensure his spot in the system this year. Travis had 45 points (21g-24a) in 64 games with Texas this season. He was also better than a point-per-game player for the Stars in the playoffs with 3 goals and 4 assists in six games.

I expect that Sceviour will be one of the first call players for the NHL club this season as he continues to grow and mature as a professional. Morin has the potential to be the same, depending on camp. He will definitely help to be a quality depth player in the minors for Dallas.

Update: Contract details have been posted.