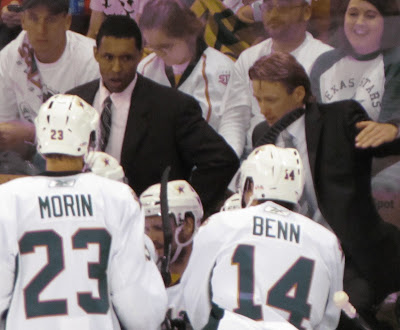 Coach Jerrard will join Gulutzan behind the bench in Dallas. The two are seen in this file photo talking to Travis Morin and Jamie Benn during the Game 3 of the 2010 Calder Cup Finals. (Credit: Brian Hackert)
Texas GM Scott White will be starting from scratch with his coaching staff in the fall as news came out over the weekend that Texas assistant coach Paul Jerrard had been hired to replace Charlie Huddy in Dallas.

Announcers at the NHL Draft mentioned the Jerrard hiring on Friday. Coach Gulutzan appeared on WFAA in Dallas last night, confirming the hire:

"We just brought on Paul Jerrard, who was with me in Austin for two years. I think when a head coach comes in he has to be comfortable. ... There's got to be some synergy in that coaching staff and we thought bringing in Paul would help us in that regard."

For a bit of background, check out this great article that Scott Burnside wrote for Black History Month while Jerrard was in Iowa. The story from 2007 is a wonderful read, especially when you already know the ending.

Now Texas starts over. Dallas candidate Kirk Muller was just recently hired for the Milwaukee Admirals head coaching job, replacing Lane Lambert who went to the Predators' staff. There are two ways to go here. Texas could go "up", grabbing an NHL assistant for the head job, or "down", plucking an ECHL or CHL head coach from the lower league. With development camp this week, the Stars will begin buckling down on that search over the next few weeks.
dallas stars