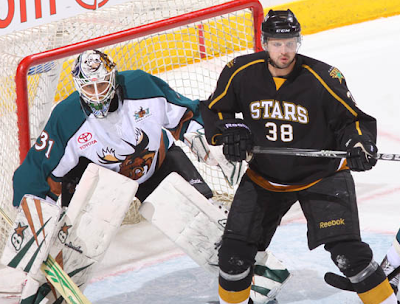 Goaltender Eddie Lack and the Vancouver Canucks' prospects will be among many AHL prospects relocating this summer. (Credit: Manitoba Moose)

With the move of the Atlanta Thrashers to Winnipeg and subsequent move of the Manitoba Moose to St. John's, Newfoundland, there's quite a bit of affiliation news going on right now in the AHL. At current count, I have at least six teams with changing or uncertain affiliations for 2011-12. Let's run them down and what some likely outcomes are.

First, let's take a look at the aftermath caused by the Thrashers' move. The move caused a chain reaction of moving the Moose to St. John's, Newfoundland. (That's St. John's, Newfoundland, not Saint John, New Brunswick, by the way.) The Manitoba Moose are owned by True North Sports, the same group that purchased the Thrashers, which means that the new St. John's team will be the AHL club for the Winnipeg NHL team.

This change leaves both Vancouver (NHL) and Chicago (AHL) without an affiliate. That pairing certainly seems like a match made in heaven for Vancouver, if not Chicago as well. However, reports indicate that six different NHL teams have contacted the Wolves about affiliation for 2011-12. There's a reason. Chicago is a team with a lot of tradition of winning, good ownership, and the ability to compete for a Calder Cup every year. It's a high likelihood, but the Wolves are paring their choices down to three before moving forward.

The Rochester Americans have been quite unhappy with their relationship with the Florida Panthers. The Americans, one of the oldest teams in the AHL, have had difficulty fielding a playoff club these past few years and are yearning for days of yore. Hence, the Buffalo Sabres have stepped up to the plate. They have signed a nonbinding letter of intent to purchase the Rochester Americans. The Sabres have a strong tradition with the Americans, with the two being affiliated as recently as 2008. However, the Portland Pirates and Sabres are locked into a contract until 2013-14. If all the hurdles are cleared, however, this puts Portland and Florida out in the cold.

Additionally, the perpetually unhappy Syracuse Crunch have had previously documented issues in their relationship with the Anaheim Ducks. For example, the Ducks refused to send a player to the Crunch when he was traded from Vancouver because he had a better chance of making the playoffs in Manitoba. It was true but understandably left a bad taste in Syracuse fans' mouths. Reports indicate that Tampa Bay is looking for a new affiliate, and Syracuse is a potential suitor. Of course, Tampa Bay could also be one of those teams knocking on the Wolves' door.

When does this all shake out?

Most years the affiliation landscape would already be hashed out by now. For example, the Lowell/Albany/Charlotte changes were already publicly announced by this time last year. League-wide reporter, Patrick Williams, expects much of the confusion to be cleared up in the next two weeks. The Thrashers move caused a lot of the usually timelines to be delayed. With things settling out for that organization, the picture should become clearer in the next ten to fourteen days.
around the league the business side