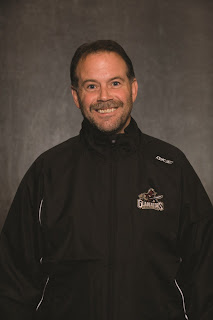 The Texas Stars announced today that they have hired Jeff Pyle of the Gwinnett Gladiators to be the next head coach of the franchise. Pyle comes to Texas with twelve years of head coaching experience at the ECHL level in the Atlanta Thrashers organization with both Mobile and Gwinnett.

Pyle made the playoffs in six of his eight years in Gwinnett, including a trip to the ECHL Finals in 2006. He is 3rd all-time in the ECHL in regular season wins, seasons coached, games coached, and playoff appearances. His Gladiators are well-known for their special teams prowess, setting the ECHL record for PP goals scored in 06-07 with 120. Pyle played professionally for 13 years as well between North America and Germany, amassing 1,313 points in 795 games and winning four league titles.

"[Coach Pyle's] a smart hockey guy, and he's deserving of this opportunity," said GM Scott White, who coached the Columbia Inferno against Pyle in the ECHL. Pyle was selected from a short list of five who received in-person interviews with the team. The field ran the gamut from NHL and AHL assistants to ECHL coaches as well.

White indicated that Joe Nieuwendyk and Les Jackson really took a liking to Pyle because he has a lot of "Dallas Stars attributes" including passion, energy and knowledge about the game. That synergy with Dallas is seen as a huge plus for the new hire. "We're going to play the game that the Dallas Stars play," said White. "[Until now], we haven't had that vertical system and I believe that's going to benefit our players here"

Coach Pyle is currently vacationing with his wife and two children in California but was available by phone. Asked to describe his team's style of play, Pyle indicated that an up-tempo style would be showcased on the ice next season: "I like to be up-tempo. I like when the game opens up and we can be creative. When we have a chance to do the little things well and you can be offensive, I want them to go."

A staple of Texas Stars hockey in their two years in the league has been defensive responsibility, and Coach Pyle intends to continue that style. "I want them to be as proud to stop a goal as they are to score one." 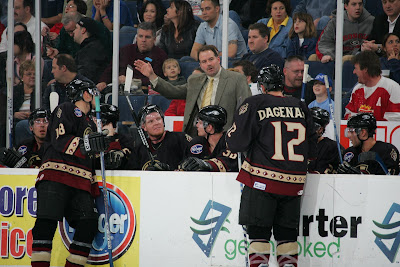 Another big adjective describing Pyle was accountability. Recent Stars signing Ryan Garbutt, who played ten games for Pyle in Gwinnett before his callup to Chicago last season, said Pyle is a true player's coach. "He holds you accountable for winning. He instills success in his players. He pushes his players up to the next level and to be better all the time."

On the subject of accountability, I asked Pyle about his team last year, which started strong with eight wins in ten games, but ultimately missed the playoffs. That club lost a total of sixteen callups to the AHL last year. Additionally, injuries to eight different players led to 277 man-games lost to injury on the season.

Coach Pyle, who could have easily made excuses for the playoff miss, holds himself accountable, just as he expects of his players. "We had a lot of little things that we battled through," said Pyle. "My job is to find a way to win no matter if you're shorthanded or what happens."

He hopes to instill that accountability in the Texas Stars as well this season.