Is There Room For Tryouts on Stars Opening Roster?

Posted by Stephen Meserve on September 29, 2011 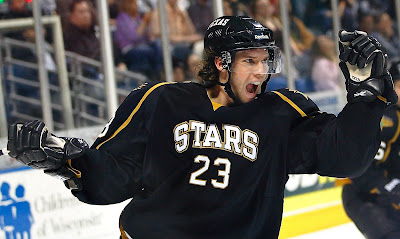 Travis Morin came to Texas's camp on a tryout in 2009 and has since earned a two-year contract from Dallas and several games with the NHL club. Who's next? (Credit: Chris Jerina)
As the Stars took the ice on Tuesday, most of the players in that first practice sent the gathered crowd to scour their roster sheets to figure out names. That opening day, Texas had fifteen guys on tryouts and many of them are expected to play in this weekend's exhibition games.

However, as we've previously discussed in this space, there is practically no space for tryout players on this year's opening roster with all of the players coming down from Dallas. The question then becomes what is the Texas front office and coaching staff looking for in these tryouts and what are the prospects of them earning time at the AHL level.

Texas Stars general manager Scott White is the one with that ultimate decision of who to sign and who to cut from the training camp tryout roster. "Our bread and butter is our defensive zone structure. We want to see how guys adapt to the play in game situations," said White on Tuesday. "If guys aren't smart enough to play it, that makes the decision."

When pressed on how many tryout players are likely to make the roster, White admitted that the chances were slim for an opening day slot for many of the skaters.

"Most of the time there's three or four guys who make an impression here. Now, do they make the opening roster? Maybe not. But those are the guys we call up during the course of the season that we know about and we've learned the character of the player and what they do well. Three or four guys last year on tryouts who were let go at the beginning of our camp found their way back."

One of those guys, for example, was Kael Mouillierat, who scored a few points in the preseason with Texas but spent most of the season in Idaho. However, he was called up in the regular season as an injury replacement precisely because of his strong play in the preseason. For tryout players now, that is the goal: do enough to get on the radar later in the season when injuries in Dallas or Texas force White's hand to acquire some more bodies.

Coaches also have a say in that decision and Pyle is looking for much the same as his GM. "[Tryout players] have to come in here and do the little things well. They're not going to come in here and be on our top lines or power play," said Pyle. "They've got to be able to get pucks in and get pucks out, read situations and defend."

"We all know they can skate and shoot, but can they think the game? That's a big thing."

Texas received seven players assigned from Dallas yesterday who were all in camp this morning. Those players are forwards Matt Fraser, Ryan Garbutt and Luke Gazdic; defensemen Jordie Benn and Brenden Dillon; and goalie Tyler Beskorowany.