Stars' Captain Lukowich a Role Model On and Off the Ice

Posted by Stephen Meserve on September 28, 2011 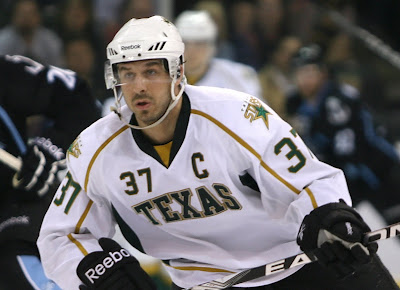 Lukowich tracks the puck in a playoff game against Milwaukee last season (Credit: Ron Byrd)
Beginning his third year in Cedar Park, Brad Lukowich is the epitome of veteran leadership for the young Texas Stars. The captain began his career with the Dallas Stars organization with his first NHL game in 1997 and has come back to provide mentorship and stability to a young corps of prospects.

Like any good captain, Lukowich arrived a little early at camp "to get [Coach Pyle's] terminology and talk to the other guys and tell them what it's all about." However, in addition to his aid on the ice, Lukowich has gained some notoriety for his off-ice charitable efforts, especially those surrounding the Central Texas wildfires this summer.

The defenseman, who is the 'old man' on the roster at the age of 35, lives with his family in Crystal Falls in Cedar Park and was ready to evacuate when news came of the fire on Bagdad Road. "We could hear the police officers going around and evacuating the area," said Lukowich. "We packed up and had all of our stuff in the back of the vehicles, just waiting for us to get out." Overnight, the fire subsided thanks to the gargatuan effort of local police and fire crews.

"The fire and policemen did a fantastic job of handling that fire."

The next day, Lukowich pulled up to a check stop outside his neighborhood and engaged a police officer in a conversation. The policemen, who had been working for five hours straight in sweltering 105 degree plus heat, were in desperate need of water and Gatorade. Lukowich contacted the Texas Stars who dipped into their charitable fund to donate a flat of Gatorade to the officers in Brad's neighborhood.

"I went down in my jeep and wrecked my shocks by putting a whole flat of Gatorade in the back of my car," said Lukowich, laughing. "It was well worth it. Those guys did an amazing job and we owe a lot to them."

With his wife, Cara, the Texas Stars Foundation is continuing to look for ways to help those affected by the fires throughout the season. "I wasn't just those 9 days. There are a lot of families that are still out and looking for help."

And for those fresh faces in camp who may not have been here when the fires broke out, Lukowich plans to make sure that they all get involved too.

"We owe a lot to the city, and you're not just here as a hockey player," he said. "You become part of the city, and it's something we push for, for these younger guys to get out there and help out."
human interest training camp