Posted by Stephen Meserve on September 13, 2011 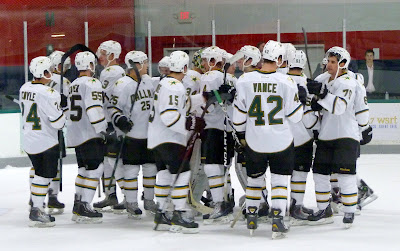 The Stars' prospects celebrate Saturday's 8-2 win over Carolina. (Credit: Judy True)
Hockey is back in action across the country with prospect tournaments in various cities showcasing the next generation of potential NHL stars. Dallas began the Traverse City tournament this weekend by splitting their two games.

Matt Fraser led the charge in Saturday's game with a hat trick en route to an 8-2 victory over the Carolina Hurricanes prospects. The first goal for the team came just 30 seconds into the match, with Dallas scoring four before Carolina even managed a shot on goal. Tyler Beskorowany got the start in net for Dallas and other goals were scored by Matt Tassone, Stephen Schultz, Jamie Oleksiak, Matej Stransky, and Matt Carter.

Coach Jeff Pyle told ESPN Dallas: "Matt Fraser gave us a nice goal on the first shift which gave a nice atmosphere and everybody just fed off it. It was a great effort by the guys. We just stood back there and kind of rolled them." 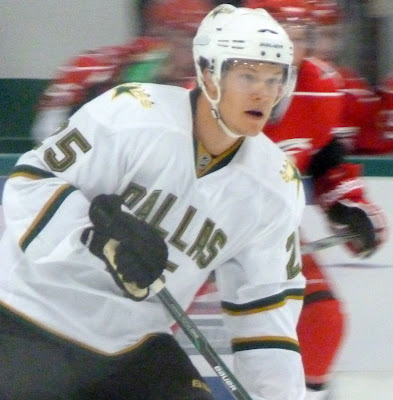 Sunday's game, which many of you may have watched on the NHL Network, was against the NY Rangers. The game did not go as swimmingly as Saturday's. Just 21 seconds into the game, New York scored a goal and earned a lead they would not relinquish. Scott Oke and Matt Fraser scored for Dallas in the loss and Jack Campbell took the loss, allowing six goals on 44 shots.

I would not take a lot of stock in just these 120 minutes of hockey, but it is very nice to see players like Fraser making offensive impact. For a long time, the Dallas farm system has lacked flashy scoring with draft picks usually being of the "gritty" forward instead of "star" forward type. Fraser is looking to be a fantastic free agent pick up for Dallas and has already started to build chemistry with his future teammate Scott Glennie on a line together in Traverse City.

The Stars take the ice again at 2:00 PM today against St. Louis.