Posted by Stephen Meserve on September 27, 2011

Attendees at the open practice scoured their rosters to recognize new faces, many of whom are in Cedar Park on a tryout basis. Players not on tryouts included Hubert Labrie, Tristan King, Michael Neal, Stephen Schultz, Ondrej Roman, Nick Layton, Jace Coyle, and Mike Hedden. Captain Brad Lukowich, who received hearty applause from the crowd when he stepped onto the ice, also returned to Austin in time for the first practice.

Highlights on the tryout list include Tyler Arnason, Ned Lukacevic, and Matt Tassone. Arnason won the AHL's Rookie of the Year award in 2002 and is a veteran of 487 NHL games with 88 goals and 157 assists for Chicago, Ottawa and Colorado. He spent the last two year in Europe with the KHL, Swiss leagues and SM-liiga. His offensive totals dropped off quite a bit in Europe despite their reputation as a more open offensive style of play.

Ned Lukacevic played two games for the Texas Stars in the 2009-10 season and then spent most of last season with the San Antonio Rampage, potting four goals and nine assists in 38 games of work. Finally, Matt Tassone is a Dallas draftee who was never actually signed by Dallas. He went to Traverse City with the Dallas prospects and spent last year with the Steelheads. In 32 games, he had seven goals and three assists. He has a history of injury issues and needs to prove that he is a reliably healthy player for Texas to take a flyer on him.

For Coach Pyle, it was his first day in the driver's seat. While the system that Texas will play will come from the top and Coach Gulutzan, Pyle will be changing things up a bit and adding his own twist on the systems. "I like what [Coach Gulutzan] does, but [the players] know I'm not Gully and I'm not going to try to be Gully," said Pyle. "I like his systems in the D zone and the middle zone with the swarm and the 1-3-1. When it comes to basic little things here and there, I'm going to do my own thing. When it comes to power play and penalty kill, I'm going to do my own thing."

General manager Scott White and captain Brad Lukowich also spoke after the practice and I'll have more from them as we move toward our first game action on Friday. 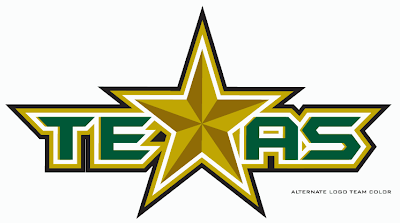 Finally, in case you missed it, Texas announced a new logo yesterday. The jerseys that they will be featured on will be revealed on October 4th.
training camp