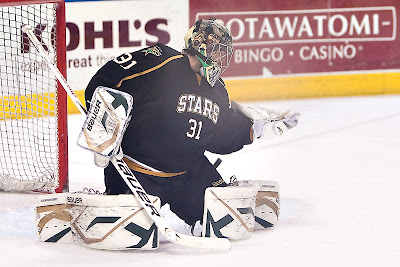 Richard Bachman in a game against the Milwaukee Admirals on April 8th, 2011 (Credit: Chris Jerina)
Dallas made their second to last cuts yesterday, getting the roster down to 25 from 32. Official opening day rosters are finalized on Wendesday afternoon, so GM Joe Nieuwendyk and Coach Gulutzan have a few more days to evaluate which players they will cut to get down to the required 23.

Those assigned today included goalie Richard Bachman, defenseman Maxime Fortunus, and forwards Eric Godard, Travis Morin, Ray Sawada, Colton Sceviour and Francis Wathier. Godard is a player that we have not discussed to this point in any major capacity. He is a physical fourth line type player who was signed to a two year deal. The first year is two-way and the second is one-way. Godard cleared waivers on the first day possible but was not assigned at that time.

The two players expected to come down to Texas still left in Dallas are Philip Larsen and Tomas Vincour. Note that Scott Glennie is also still in Dallas but will be assigned as soon as he is cleared to play after suffered concussion like symptoms in the preseason. Eric Godard's assignment could shake things up for the roster. We'll discuss that a bit more as we get closer to the opener.
dallas stars roster moves