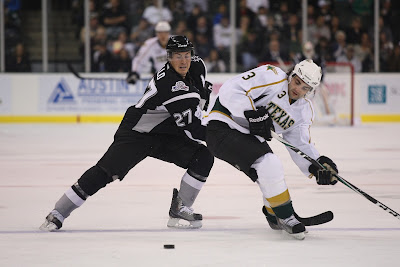 Stars defenseman Dan Spang battles for a puck with Greg Rallo (Credit: Portraits by Deena)
Despite the Stars' best efforts in the third, the San Antonio Rampage slipped by Texas in the final few minutes of tonight's contest to drop the Stars to 1-3-0-0 on the season. The Stars showed a better team character than in previous losses, coming back from an early deficit to tie the game in the final period. "Sometimes you'll get down in a game and you have to come back and that's a playoff type situation," said Maxime Fortunus.

Texas got on the board first with a power play goal from Tomas Vincour, recently sent down from Dallas. Jordie Benn and Colton Sceviour assisted on the tally, scored on the far side from the left wing circle. Only eighteen seconds later, Scott Timmins scored an unassisted goal with the puck taking a weird bounce off the end boards and catching Bachman out of the net trying to stop it. The combination of weak backchecking from Texas and strong forechecking from San Antonio meant Timmins was the first to the puck, putting it over Bachman easily. Texas finished the period ahead in shot count 13-6.

San Antonio owned the second period, scoring two. Repik was up first with a power play goal with Luke Gazdic in the box for slashing. Former Star Greg Rallo scored the second, also on the power play, to put San Antonio up 3-1. The third goal was another strange play in front of the net, where Texas seemed to be too casual on the penalty kill. "We got a little sloppy at times," said Coach Pyle. "We've got to have urgency from the get-go. We made mistakes that you cannot make."

Texas came alive in the third period, tying up the game before ceding the game winner in the last few minutes. "I liked the effort of the guys coming back," said Fortunus. "We needed to put a little more pressure on them, on their D men."

Vincour scored his second of the night just 72 seconds into the period. He collected his own rebound for the 3-2 mark. Travis Morin scored four minutes later on a redirected Fortunus shot for his first of the year and to tie it at three. The crowd was back in it and so were the Stars. Texas outshot San Antonio in every period and overall at 39-19.

The final goal came with only 108 seconds left in the game. Texas had just been guilty of an icing infraction, and Coach Pyle called his timeout to give his skaters a chance to rest their legs. After a faceoff win, Scott Timmins got his second goal of the night and third of the year, ringing one off the post to make it 4-3. The Stars tried to mount a comeback but couldn't put it together.

The Stars take the ice again on Saturday against Peoria.

Scott Glennie played in his first game of the season tonight. Ondrej Roman was scratched to make room for him.