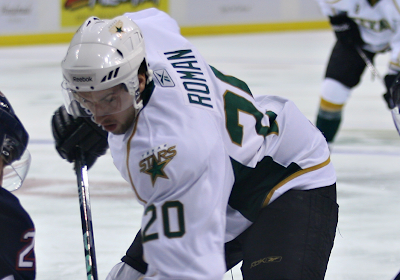 The Stars announced today at they have sent two players down to Idaho, defenseman Hubert Labrie and forward Ondrej Roman.

Labrie's assignment was expected by many as he had not gotten into any games this season and was the 8th man on the roster with Philip Larsen's assignment from Dallas. It does the young blue liner no good to be sitting in the press box when he can be getting ice time in Boise. This assignment makes sense.

Ondrej Roman has had a rough fall this season. Roman was thrice a healthy scratch. He has played on the fourth line this season in his two games and recorded no statistics and only two shots in the games. This is not a death knell for Roman, but it certainly doesn't feel good. He is not getting ice here, so he might as well get some in Idaho. Other popular Texas Stars who got some seasoning in Boise after time with Texas include Luke Gazdic and Mathieu Tousignant. They've both turned out just fine. Time will tell how this sets up Roman's career trajectory.

The 22-year old Roman is in his second full season after playing in 72 games with Texas last year. As a rookie, Roman scored eight goals and set up 14 for a total of 22 points. The Ostrava-Prouba, Czech Republic native is scoreless in two appearances for the Stars this season. Dallas drafted Roman in the fifth round (#136 overall) in the 2007 NHL Entry Draft.

Labrie turns pro after playing the last four years in Gatineau of the QMJHL from 2007-08. In 192 QMJHL games, the 21-year old defenseman scored ten goals and set up 38 others for a total of 48 points. Labrie participated in training camp with the Dallas Stars and Texas Stars.