Texas Falls in OT to Rampage 3-2 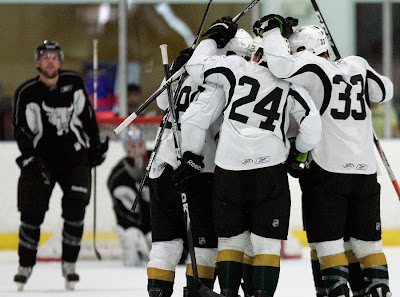 Texas dropped to 0-2 on the preseason with their last game coming tomorrow as the Rampage completed a come-fromt-behind OT victory today at the Northwoods Ice Center. Goaltender Billy Sauer stopped 43 of 46 for Texas in the losing effort. The Stars will play their final preseason game on Sunday against Houston.

Scoring opened up in the second as the game got a bit chippier as well. The Stars struck first, breaking the tie with a power play goal from Jace Coyle on the point. Coyle's shot was screened all the way and had a clear line to twine. Assists on the play went to Rob Bordson and Matt Case.

The Rampage evened it up just under two minutes later with a goal from Garrett Wilson. San Antonio just had a clear and strong breakout and struck with velocity in the Stars zone to tally their first of the night. 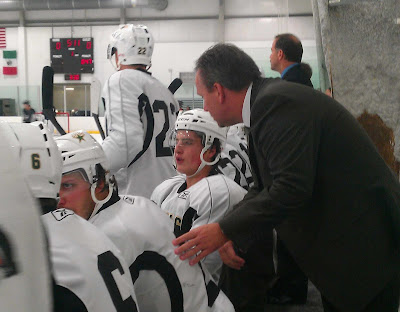 Coach Jeff Truitt mentors a player on the Stars' bench.

With former Star Greg Rallo in the box for interference, Texas jumped out to a lead to end the period. Former Gwinnett Gladiator Patrick Galivan buried a one-timer from the left wing circle to go ahead 2-1 with help from Chad Klassen and Andrew Randazzo.

Texas played through a mostly scoreless, but very shot-heavy, third until San Antonio pulled goalie Andrew Volkening for the extra attacker. Greg Rallo twisted the knife by scoring the game tying goal with 43.9 seconds left in regulation. Assists to Tyson Strachan and David Marshall. The Stars would go to overtime and fall 3-2 to the Rampage on a goal from Cullen at 2:44 of the OT. Assists on the that goal went to Strachan and Thomas.

Billy Sauer had a solid third period but didn't get the win. After the second period, San Antonio had 18 shots and finished the game with 46, meaning the Rampage bombed Sauer with 28 shots in 22:44 of action. It was a solid outing but he just didn't get the W.

Injuries, scratches, and notes:
There are too many variables here to keep track of all of the scratches, injuries and call-ups. I will resume this section in the regular season.