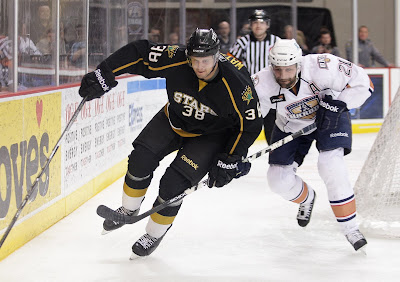 Just a quick note here that Texas received Francis Wathier back from Dallas today. Vernon Fiddler was able to play in last night's game against Colorado, eliminating the need for the callup. Wathier will be available for tomorrow's game in Charlotte.

As a side note, I usually cover transactions on my Twitter before I write up a blog post about them. If you want to know about up-to-the-minute transaction information, why don't you give me a follow at @100degreehockey?

The Dallas Stars announced on Tuesday that the NHL club has assigned forward Francis Wathier to the Texas Stars, Dallas’ primary affiliate in the American Hockey League (AHL).

Wathier (pronounced WATH-ee-ay) was recalled on Nov. 27 and was a healthy scratch in Monday night's game at Colorado. Wathier has skated in 19 games for the Texas Stars this season, posting five goals and seven assists totaling 12 points while earning a team-leading plus/minus rating of +3. The 6-4, 218-pound forward has gone scoreless in his eight career games with the Dallas Stars, posting an even-or-plus rating in six of the contests. The St. Isidore, Ontario, native was Dallas’ sixth-round selection (185th overall) in the 2003 NHL Entry Draft.