Posted by Stephen Meserve on November 11, 2011
November 11th at 7:00 PM
Cedar Park Center, Cedar Park, TX
After a long layoff, the Stars look to continue their three-game winning streak with a battle against the Abbotsford Heat this Veteran's Day. This is the first of eight meetings between the teams, which are division rivals for the first time this season.

Abbotsford is coming on strong in the early going on this season. Their leading scorer, Krys Kolanos, was just recently named the AHL Player of the Week with 7-6-13 so far on the season in just 6 games. Other top players include the returning Greg Nemisz with 6-6-12 in 13 games and Ben Walter, who played for Lake Erie last season, with 4-7-11 in 13 GP. The top scorer against the Stars last season, TJ Brodie, is in the NHL with Calgary for this weekend's games.

Texas is 4-3-0-1 all-time against the Heat and 2-1-0-1 in Cedar Park. The Heat are coming off a 5-3 victory over the Houston Aeros at the Toyota Center last night. The Third Intermission notes that the Aeros lost because they got into penalty trouble and allowed two PPGs on just four chances. The Heat PP is dangerous at 4th in the league with 26.9%. Texas, as we have documented, has a bad statistical penalty kill at 76.5% (27th), but has tightened up recently, only allowing two PPGs against in their last four games (86.7%). Part of the challenge tonight for Texas will be their own power play. Clicking along at 33.3%, they will face the #7 ranked PK of Abbotsford (85%). The road PK for ABB is even better at 89.2%. 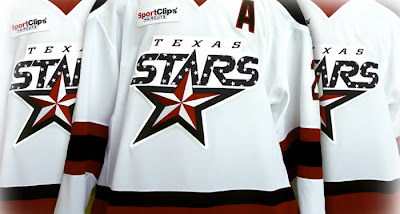 Goaltenders for the Heat include the returning Leland Irving, who has all of Abbotsford's wins at 8-4-0 on the season. He has a 2.21 GAA and .909 SV% with one shutout. Joni Ortio is the backup for Abby, seeing action in three games and earning a record of 0-1-0. The 2009 sixth round draft pick for Calgary saw one game last year and previously played in SM-liiga for TPS Turku.

In remains to be seen how recent callup Ondrej Roman fits into this lineup. Coach Pyle is unlikely to break up any of the first three lines, in my estimation, due to the success they have been enjoying. The Fraser-Morin-Sawada line is one of the best in the conference. The Wathier-Garbutt-Vincour line features two players on scoring streaks of five games or more. And finally, the Gazdic-Sceviour-Glennie line got off to a slow start but banged in two points each on Thursday against Toronto. Hedden-Tousignant-Schultz had good chances and strong energy on Thursday night as well, and it's only a matter of time before it breaks through.

The point was raised on Defending Big D that the Ondrej Roman callup and the placement of Dallas forward Steve Ott on IR may indicate that someone is getting a callup from Texas. At this point, I think that is unlikely. Dallas is in the middle of a roadtrip on the East Coast and has done just fine without Ott or an extra body in the press box so far on the trip. With coach Gulutzan exchanging Dowell, Barch, Petersen and Wandell on the fourth line so fluidly, there doesn't seem to be a need for the call. I would be very surprised if anything did come of the situation.

Stars injury/call up report:
None.