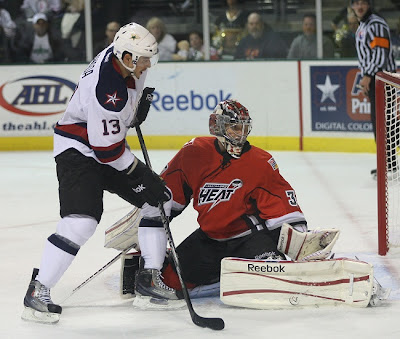 Ray Sawada bears down on Heat goalie Leland Irving. Irving was phenomenal in the game, earning the first star with a 35 save performance. (Credit: Portraits by Deena)
The fell to the Heat for the second consecutive night this evening in Cedar Park, falling this time in regulation by a score of 3-1. The majority of scoring came in the early second period as both teams came out of the gate with a track meet mentality. Abbotsford and Texas traded goals with the Heat collecting two to Texas's one. The only other goal of the game came in the third to seal it up. Texas's power play went zero for six on the night. Jordie Benn was the only goal scorer for Texas.

Both teams skated to a scoreless first period as the tight checking game mentality from last night's first period seemeed to be the rule. As the second opened, both teams got into a pacey game. Abbotsford struck first with a goal by Jon Rheault on a turnover in Texas's D zone.

The Stars scored just 18 seconds later to make it 1-1. Jordie Benn scored his third of the year off a faceoff win by Ryan Garbutt. Brad Lukowich also assisted on the play. The Heat struck back themselves with another from Raitis Ivanans, his first pro goal since December 27th, 2008.

Texas got opportunities in the game on the power play but couldn't convert. "We're still getting good looks," said Dan Spang. "But we're hitting a lot of crossbars." The Stars seemed to just have issues putting it all together on the same play. Puck possession was an issue and Texas lost a fair number of puck battles along the boards.

The only other goal of the game came as Tyler Beskorowany cleared a puck into Rheault's chest. Rheault got it to the ice and deftly went around Beskorowany, who was out at the hashes, to pot his second of the night.

Overall, the game felt very winnable at all points throughout the night. Texas will look to rebound against San Antonio tomorrow afternoon, a team they beat 4-0 last weekend. The Stars will be playing their third in three nights and the Rampage will be working on one day's rest.