Rampage Break Through Against Stars, 3-2 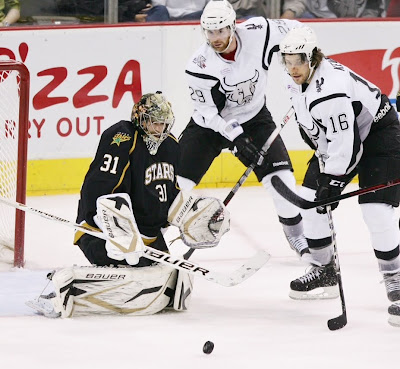 Stars goalie Richard Bachman tracks a puck as Rampage forward Bracken Kearns looks to collect a rebound. Bachman had 25 saves on 28 shots in the game. (Credit: Darren Abate/pressphotointl.com)
The Stars have now followed their season high three game win streak with a three game losing streak in their first 3-in-3 of the year. Texas fell to a scrappy San Antonio crew this afternoon at the AT&T Center after falling behind in the second period. Texas collected goals from Francis Wathier and Tomas Vincour on the night but came up short on the game tying goal.

The game started out with a bang as Brenden Dillon dropped the gloves with Bracken Kearns only 18 seconds in to the first. It was the Stars who struck first on the scoreboard, however, late in that first period. On the power play, Francis Wathier tipped a point shot from Jordie Benn to make it 1-0. Tomas Vincour collected as assist on the play as well. The Stars would end the first at a 1-0 lead with a shots advantage of 9-7.

The Rampage controlled the second period though as they outshot Texas 11-5 and outscored them as well. Late in the period, San Antonio tied it up with snipe of a goal by Tim Kennedy that beat Bachman over the left shoulder. Four minutes later San Antonio would jump ahead of Texas with a rebound goal by Mark Cullen.

San Antonio also opened the scoring in the third period as Scott Timmins netted his third of the year on the rush with assists to Evan Oberg and David Marshall. Shortly thereafter, second would go on the power play with Oberg in the box for holding. It was Tomas Vincour finding the net for the 8th time this year. The power play tally went off the post and in with assists from Sceviour and Wathier. The lead was cut to 3-2 for San Antonio.

Texas attempted to even things up in the dying minutes of the third, but San Antonio's Jakob Markstrom kept things at a one goal lead for the Rampage. The win broke a three game losing streak for the Rampage. Texas was 2/5 on the PP and held San Antonio without a power play tally on 4 attempts.

Texas is idle until Friday when they will travel to Houston to meet the Aeros.