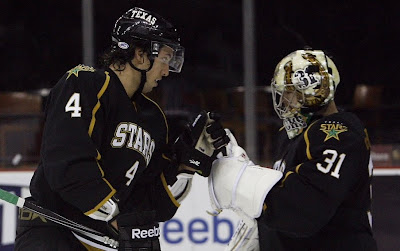 Brenden Dillon and Richard Bachman fist bump after Dillon's blast found twine thanks to a tip by Francis Wathier in the second period. (Credit: Soobum Im)
The Stars took the short trip down I-35 today and returned with a strong victory over the San Antonio Rampage to put them above .500 with a 6-5-0-0 record. Texas skaters Vincour and Wathier both extended point and goal scoring streaks on the night to six and five games respectively. Richard Bachman collected a shutout with a 29 save outing, his second shutout of the season.

And while Texas got scoring from their top three lines in the game, the big story was special teams. Texas held the Rampage without a power play goal despite six opportunities. The Stars only allowed two power play goals in their last four games (13/15).

Texas opened the scoring right away in this game with a goal from Texas's top line of Fraser-Morin-Sawada. Ray Sawada found Travis Morin on the right side of the net where he got a shot off and collected his own rebound for the first goal exactly at the one minute mark of the period. The goal was his fourth of the year and was assisted by Sawada and Fraser. With the assist, Fraser took sole possession of the lead for rookie PP points at seven. Texas outshot the Rampage nine to eight in the period.

The Stars kept the pressure on with a goal by Francis Wathier at the 12:25 mark of the second. Brenden Dillon blasted a shot from the right point, which Wathier tipped in front for the 2-0 lead. The goal extended Wathier's scoring streak to five games.

Not wanting to be left out of the scoring streak talk, Tomas Vincour picked up a goal of his own in the dying seconds of the second period. With Texas on the power play, Vincour snapped one past Foster for his 7th goal of the year and fifth in as many games. Assists went to linemates Francis Wathier and Ryan Garbutt. The period ended with a 14-5 shot advantage for Texas in the frame.

The Stars continued to pour it on in the third period. Luke Gazdic picked up his fourth of the season with assists from Sceviour and Fortunus, his second of the night. Richard Bachman was spectacular in the final frame, keeping everything in front of him, especially on the Rampage power play.

Texas now has a long layoff before the Abbotsford Heat come to town for two on Friday and Saturday. The Heat will play in Houston on Thursday night and will play the Stars to complete the 3-in-3.

Tomas Vincour and Francis Wathier both extended their scoring streaks with points tonight. Tomas Vincour's streak of points stretched to six with a goal in the second and his goal streak went to five games with the same tally. Wathier picked up a goal and an assist to set his point streak at five games, going 3-3-6 over that period.

Maxime Fortunus returned to the lineup and collected two assists, both secondaries.