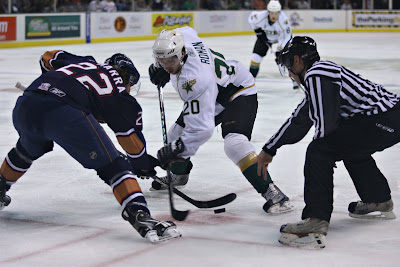 (Credit: Texas Stars)
The Texas Stars announced this afternoon that they have recalled forward Ondrej Roman from the Idaho Steelheads. He has had a great stint with the Steelheads, getting some good ice with the team and contributing six points in six games.

This movement presages one of two things. Either another forward will be sent to Idaho or someone is injured. I would guess the send down would be either Hedden or Schultz. It is a good and bad place to be in for Texas. They have a lot of forwards playing well right now. The line of Hedden-Tousignant-Schultz is providing a spark to the team that fourth lines rarely have. The problem is that there are too many forwards playing well. We will see what happens on Friday.

The Texas Stars announced on Wednesday that forward Ondrej Roman has been recalled from the Idaho Steelheads, the Stars’ ECHL affiliate.

The 22-year old Roman played in six games for the Steelheads this year, posting two goals and totaling six points. He played two games in Texas without securing a point. Roman is in his second full season of pro hockey after playing in 72 games with Texas last year. As a rookie, Roman scored eight goals and set up 14 for a total of 22 points. The Ostrava-Prouba, Czech Republic native is scoreless in two appearances for the Stars this season. Dallas drafted Roman in the fifth round (#136 overall) in the 2007 NHL Entry Draft.