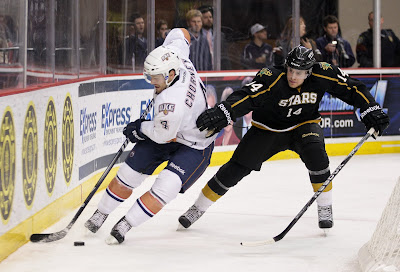 Stephen Schultz, who scored his first pro goal tonight, works on Barons' defenseman Taylor Chorney behind the net. (Credit: Steven Christy)
Tonight in Oklahoma City, the Stars played arguably one of their best game of the season, beating the league-leading Barons by the score of 3-2. Texas did their damage in the first period with three goals in the period. Scoring came evenly from three of the four lines. The Stars limited shots against, allowing only 20 in the entire contest, which certainly helped matters.

Texas opened the scoring three minutes into the first with the first professional goal from rookie Stephen Schultz. The Colorado College product collected his tally generating traffic in front with assists to Roman and Hedden. Hedden was moved to this line after a few games on the top line with Sawada and Morin.

Six minutes later, Texas was up a man with a delayed penalty coming for the Barons. Dan Spang jumped over the board as the extra attacker. Texas setup a power play look with Sawada in front. He was rewarded as Brenden Dillon blasted a point shot that Sawada tipped past David LeNeveu.

Sceviour had the Stars third goal of the period. Scott Glennie was down on the ice by the end of the play but Sceviour extended the Stars' lead to three with his third of the year. The Stars and Barons tied on shots in the period at eleven.

Yann Danis would start the second for OKC. The Stars continued their dominance in the period but didn't beat Danis. Outshooting the Barons 10-2 in the period, Texas controlled the pace and led 3-0 after 40. It was a rough and tumble period for Texas with several Stars, including Wathier, needing minor attention from DJ Amadio, the Stars trainer. All returned to the bench and didn't miss a shift.

The Barons would not go lightly into that good night though. Beskorowany needed to be sparkling including another "you've got to be good to be lucky" sprawling save early in the period on Triston Grant. Grant was involved in some nastiness halfway through the period as he sucker punched Brad Lukowich on the Stars PK. The ensuing 4-on-4 saw the Stars' give up a goal against. Taylor Chorney scored for the second time in as many games against Texas to make it 3-1.

The Stars locked it up until the last second of the game. The Barons scored an ultimately meaningless goal with 1 second left. The refs didn't even both to drop the puck after the goal. It was over, and Texas came out on top. What a quality win for Texas. The team has to feel good about this win and they deserve to.