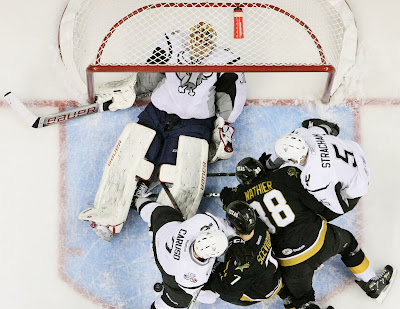 Sceviour and Wathier crash the net in this afternoon's game. (Credit: Darren Abate)
After last night's offensive outburst, Texas couldn't get past two goals again tonight despite a total of 48 shots on net. Coach Pyle has talked about Texas's lack of finish before and tonight's game showed it. As he has said, you can't take almost 50 shots and not score more than two. Tyler Beskorowany took the loss with 29 saves on 33 shots.

San Antonio opened the scoring early with Bill Thomas scoring his 8th of the year just 3:11 into the game. The shot was redirected off a pass from Mark Cullen. SA put themselves up 2-0 with a goal from Bracken Kearn with six minutes left in the first. Thomas got into the action again with a centering pass from behind the net to make the play happen.

The Stars got into the scoring in the second with Ondrej Roman's first goal of the year. The tally came as Roman intercepted a San Antonio pass and snapped it to the net quickly. The Rampage scored just under one minute later to regain their two goal lead. Thomas tipped a point shot from Cullen again for his third point of the night.

Texas poured it on in the third, outshooting SA 20-7. They only managed one goal, while allowing a Rampage marker. The only goal of the period for Texas came with nine minutes left as Matt Fraser scored his team leading 14th of the year and extended his point streak to seven games. With time winding down, Mark Cullen snapped one past Beskorowany on an open look as Texas was preoccupied with the offensive side of things.

Texas and San Antonio finished without a power play goal for either team. Texas had 4 opps to San Antonio's 2. Texas plays again on Wednesday in Houston in their last action before the Christmas break.

The top line finished a combined minus-8 tonight. The defensive play of the unit has been a going concern on the season. Fraser and Sawada (injured) are each minus-11 on the season and Travis Morin is minus-10. Ryan Garbutt, who subbed in tonight in Sawada's place, is plus-4 overall even after tonight's minus-2. Coach Pyle clearly sees that the line has scoring potential, but that they are also a defensive liability. How do you keep that line's offense clicking while also bringing up their sagging defensive?