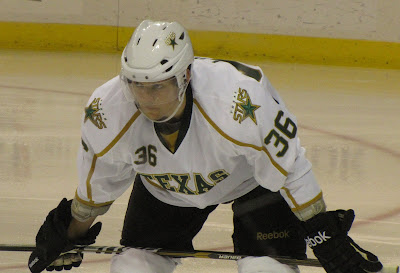 Dallas announced today that they have assigned Matt Fraser, Tomas Vincour and Philip Larsen to the Texas Stars. Fraser's assignment was expected as he was an injury callup to bolster the lineup against Anaheim last night, a game that Dallas won 1-0. Fraser will surely play in both games this weekend and attend the AHL's All-Star game on Monday.

For Tomas Vincour and Philip Larsen, it is a bit of a different story. NHL teams are allowed 23 roster players at any time, which does not include players on the injured reserver (IR). With Brenden Morrow back, hopefully, after the ASG, here is the lineup for Dallas:

That's 22 players, leaving room for only one more. That means that either Larsen or Vincour will be left in the AHL for some time post All-Star break. Since there are already seven defensemen, my guess is Larsen stays in the AHL. That is tough for the young blue liner though as he just scored his first NHL goal last week and had been selected over the past week to play instead of vets Fistric and Pardy.

For Texas, this is a huge boost. At the time of their callups, Vincour and Larsen were both top scorers for the Stars. Vincour was at thirteen points in fifteen games and Larsen a point a game player with ten in ten. If those paces continue, which is always an open question, that's an extra goal every other game.

Another question for Coach Pyle is where to place them. Both of the top two lines have been clicking along this past week. What about trying Vincour with Garbutt and Schultz to add even more scoring punch to the third line? Larsen had traditionally been paired with Lukowich, and it remains to be seen if that persists and who becomes the scratch.