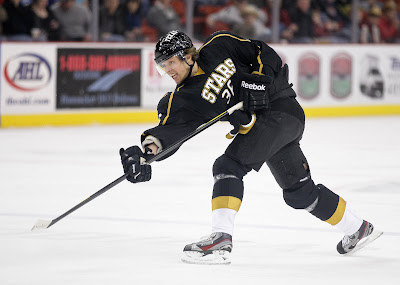 Larsen in OKC on Saturday (Credit: Steven Christy)
For the moment, it looks like Texas gets to keep Tomas Vincour as Dallas recalled Philip Larsen today. Larsen will be the eighth defenseman on the roster in Dallas, though not all of them may be ready for action. Either Souray or Robidas could still need time and today's practice will tell us that.

With Vincour staying, Dallas has reassigned Jake Hauswirth to Rio Grande Valley. The eleven games that Hauswirth played in Texas were more than I was ever expecting from the forward. He had one point on an assist in his AHL stint, playing mostly fourth line minutes.

Hauswirth's assignment is probably good news on the injury front as Mathieu Tousignant has been working hard to return, and there were concerns for Colton Sceviour, who took a hard hit in Saturday's game. No official word on either, but I hope to get something as practices resume on Wednesday.

In other news, Texas forward Matt Fraser will play in the AHL All-Star game tonight at 6:00 PM local time. Catch it on FSSW+, if you get that channel.

Here's the release on Larsen and Hauswirth:

The Dallas Stars announced on Monday that defenseman Philip Larsen has been recalled from the Texas Stars, Dallas’ primary affiliate in the American Hockey League (AHL). Dallas also reassigned forward Jake Hauswirth from Texas to the Rio Grande Valley Killer Bees of the Central Hockey League.

Larsen, 22, has skated in 21 games for Dallas this season, scoring one goal and two assists in that span. The Esbjerg, DNK native ranks second among Dallas defensemen with a +7 rating and is averaging 17:10 of time-on-ice per game. Earlier this season, Larsen became the first Danish-born defenseman to score an NHL goal since Poul Popiel in the 1971-72 season for the Vancouver Canucks. The young defenseman has played in 12 games for Texas this season, setting up nine goals and racking up ten points. Dallas drafted Larsen with the 149th pick (fifth round) of the 2008 NHL Entry Draft.

Hauswirth played in 11 games for Texas, setting up one goal for his first AHL point. He started the 2011-12 season with Rio Grande Valley, scoring six goals and adding seven assists for 13 points in 21 games played. The Dallas Stars acquired Hauswirth in a trade with the Florida Panthers on December 7. Dallas sent forward Krys Barch to Florida in exchange for Hauswirth and a sixth-round pick. The 6-foot-5, 215-pound right wing is in his third pro season, spending the first two pro years in the ECHL with Cincinnati and South Carolina. In all, the Merrill, WI native has played in 142 pro games, scoring 35 goals and totaling 76 points.