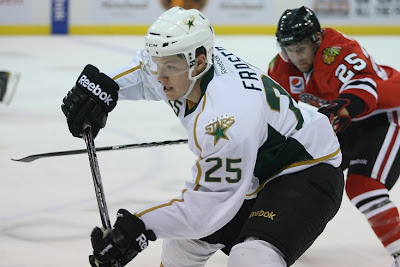 Fraser in a game versus Rockford on January 8th (Credit: Portraits by Deena)
Dallas has placed NHL All-Star Jamie Benn on the IR retroactive to January 14th and recalled AHL All-Star Matt Fraser in his place. While Texas is currently in the midst of a three game winning streak, Dallas is on a five game losing streak that has Coach Gulutzan upset and frustrated.

"How do you deal with the problem? You have to make them aware that they are not good enough – with or without Jamie Benn and Mike Ribeiro in the lineup – to not be a hardworking team. That’s the message. They are just not good enough."

So with that, Matt Fraser gets a chance to show that he is 'good enough' to make it in the NHL. He is the sort of player that Dallas could see fit to place in the top six of their lineup as they are missing Benn and Ribeiro for at least the next week. He could also get power play time as Coach Gulutzan has shown he is willing to do with a player like Larsen who demonstrated success with it at the AHL level.

For Texas, this is a big blow. Fraser is the leading scorer and a member of the top line with Morin and Hedden. He plays big power play minutes with the Benn and four forwards unit. Texas will need to look elsewhere for scoring in his absence. Luckily, the Glennie-Sceviour-Wathier line has been heating up over the last month and is ready to fill that void. The callup comes at an opportune time for Texas as they don't play again until the weekend. It is possible that Benn could be back by then or that Fraser misses two games with Texas at most before the All-Star break.

Finally, if Fraser is in the NHL at the time of the AHL All-Star game, an alternate representative will be chosen from Texas. This happened last year when Travis Morin was in Dallas, and Francis Wathier went in his place. Morin might get another chance at the All-Star game this year if that is the case. He is 12th in the league in points and #3 in assists.
allstar dallas stars roster moves