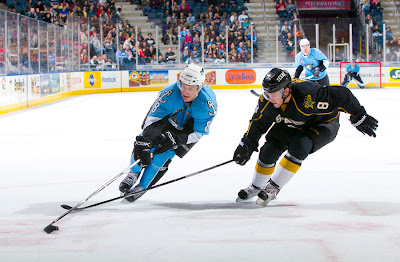 With seven healthy defensemen, Dallas decided to assigned blue liner Jordie Benn to the Texas Stars. Benn appeared in two games for the Stars, notching his first NHL point against Detroit on a Michael Ryder goal that was also assisted by his brother, Jamie. Jordie finished even in his stint.

He returns as the Texas Stars leading defensive scorer despite his absence. In addition, according to Cap Geek, he banked $32,000 in his stint at the NHL level. Not bad at all and well deserved for a talented undrafted defenseman who started his career in the CHL.

Benn is not expected to be in the lineup, however, for the Stars tonight as the big club was in Anaheim last night.