Posted by Stephen Meserve on January 11, 2012
January 11th at 7:30 PM
Cedar Park Center, Cedar Park, TX
It's been a bad beat for the Texas Stars against the Abbotsford Heat this season. Texas is 0-3-0-1 against the boys from BC this year with their only point coming at Texas on November 11th, the first game between the teams. Since then, Texas is 0-3 against the Flames farm team, being outscored 10-5 in those games.

When Texas began the series against the Heat, it was all about Leland Irving in net and Krys Kolanos up front. Kolanos continues to dominate the offense for the Heat, ranking 6th in the league with 17 goals and 21 assists in only 27 games played. However, Irving is up with the Flames, stopping pucks behind Kipper in Calgary. That doesn't mean that the Heat's netminding has suffered. Danny Taylor has stepped in admirably, going 8-3-0 with a better than Irving 2.02 GAA and .940 SV%. Joni Ortio has continued to get only backup minutes, losing all three decisions he has been in and hitting a 3.07 GAA and .869 SV%. Taylor has made the most of his callup for sure. 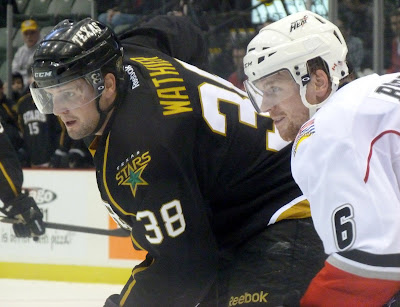 The Heat are good on the power play and the penalty kill, ranking #10 (19.7%) on the PP and #2 (87%) on the PK. Texas's PP has been trending downward (#6, 20.9%), not hard to do after clipping along at >33% early in the season, but the PK is trending majorly upward. After starting the season in 29th in the league, Texas is up to 13th in the league (83.1%). It has become an important part of the Stars' game, as Ross showed us yesterday. Texas is 3-12 when they allow a power play goal against and 12-7 when they don't. Surprisingly for many who followed the success of the power play in the early season, the PK is a more reliable indicator of success for the Stars.

So how do you make this a W? Obviously strong PK is a great start. It's even better not to need your PK if you can avoid penalties, especially "stupid penalties" like the one that sent Texas to a loss in OT on Sunday. The PP isn't as important, but it doesn't hurt. Abbotsford crushed the Rampage last night 5-0. It would be nice to stop the trend of allowing two first period goals as well. The Heat will suffocate you if you let them.