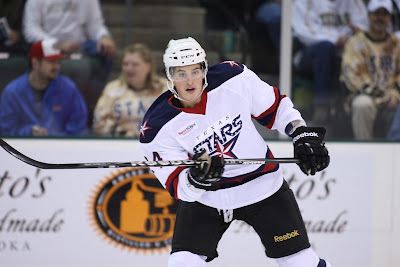 Jace Coyle in the Stars November 12th game against Abbotsford (Credit: Portraits by Deena)
The Texas Stars announced today that the club has assigned defenseman Jace Coyle to the ECHL's Idaho Steelheads. He will join the Steelheads on their road trip in Utah as Texas travels to Grand Rapids today via Chicago.

Between Coyle and Labrie, either one or both were intended to spend the majority of the season in Idaho. Both have spent extended time with Texas due to injuries in Dallas including Philip Larsen, Sheldon Souray and Stephane Robidas. Hubert Labrie made the most of his callup and has played a hard-nosed game to earn a spot on the roster nightly. Coyle still needs more seasoning in the ECHL, where he performed well previously.

The Texas Stars announced on Thursday that defenseman Jace Coyle has been reassigned from the Texas Stars to the Idaho Steelheads of the ECHL. Texas is Dallas’ primary affiliate in the American Hockey League (AHL) and Idaho is Dallas’ ECHL affiliate.

The rookie defenseman has split time between Idaho and Texas this year, recording an assist in 17 games with the Stars this season. He also spent three games with Idaho in early December, setting up one goal for his lone ECHL point. The 21-year-old spent the last three years playing for the Medicine Hat Tigers of the Western Hockey League (WHL). The 5-foot-11, 185-pounder enjoyed his best WHL in 2009-10, setting up 36 goals and totaling 46 points in 68 games played. In 241 WHL games from 2007-11, Coyle scored 25 goals and totaled 107 points. The undrafted defenseman attended training camp with the NHL’s Dallas Stars in 2011 and played for the Stars in the 2011 Traverse City Prospects camp.