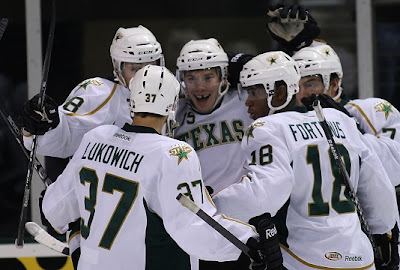 Stars Overcome Penalty Woes to Down Penguins in Shootout

The Texas Stars improved upon their perfect record in 2020 (6-0-0-0), defeating the Wilkes-Barre/Scranton Penguins in a shootout 4-3 on Friday. The contest concluded WBS’ first ever visit to Cedar Park as the Stars picked up wins in both games.

“In situations like that, that's when the character shines through,” said head coach Neil Graham. “And I think our guys do a good job; guys took advantage of a couple of very early goals.”

The character that he was referring to had to do with his team overcoming six total penalties that peppered the game at inopportune moments. The Stars carried a 3-2 lead into the third period, and the recipe for victory was rather simple: stay out of the box.

That didn’t happen. Dillon Heatherington’s penalty carried over from the second period, and the Stars committed two during the ensuing kill in short order. The litany of blunders gave the Penguins the opportunity to tie the game and force overtime.

The Penguins tallied one goal to tie the game at…