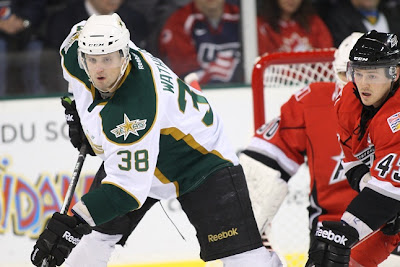 (Credit: Portraits by Deena)
Some strong defensive play and a little bit of puck luck put the Texas Stars past the Abbotsford Heat for the first time this season tonight in Cedar Park. The game had the looks of a goalie battle early as both teams were scoreless through the first. "We focused on being on the defensive side of pucks and waiting for our opportunities and taking advantage of them," said Stephen Schultz, who potted one in the game off an opportunistic bounce. Colton Sceviour collected the game winner with just 11.7 seconds left in the third period.

"The puck turned over somehow. I was yelling for it, and [Glennie] threw it to me," said Sceviour. "I made sure I could hit the net, and it went right where I wanted it to." The win puts Texas back at .500 for the season.

Texas and Abbotsford skated to a scoreless first as Texas outshot the Heat 11-2 through the first 16 minuntes of the period. Abbotsford caught up in the last four minutes to finish at 11-8 shots advantage for Texas.

The games first goal didn't come until the last 64 seconds of the second period, in fact, when Danny Taylor fumbled a puck in his glove, dropping it and allowing Stephen Schultz to pot his fourth of the year unassisted. It was a good Johnny-on-the-spot play for the rookie forward, who has been thrust into more and more offensive situations with callups and injuries.

Danny Taylor would actually be pulled for the third period despite stopping 33 of 34 shots against in the game. There was no indication of injury to the tender. A similar play would tie the score as Andrew Raycroft mishandled a puck and allowed Quintin Laing his tenth of the year at the eleven minute mark of the third period.

Once again locked in a tie, Texas battled it out with defensive hockey to hopefully push the game to OT. "Any time you give up one goal against there's a pretty good chance we're going to win or at least get a point," said Sceviour.

It was Sceviour who was the game's hero and number one star. Skating down the right wing with Scott Glennie, a turnover generated a two-on-one. Sceviour pasted one to the top-right corner of the net with just 11.7 seconds left. Texas held on through the last few seconds, aided by a Heat penalty for throwing a stick on the ice from the bench, to win 2-1.

As to what was different in this game, Texas targeted the top line of the Heat for matchups. "They barrage you with hits to take advantage," said Sceviour. "We were able to get our matchup with their top line. That top line with Kolanos, Walter and Rheault is a big component getting a lot of offense for them."

Texas now travels to the Midwest to play Grand Rapids, Milwaukee, Rockford and Chicago. They will try to play the same game as they did tonight against the Heat to collect some much needed wins.

Matt Fraser felt under the weather, tried things out in warmups and wasn't feeling well enough to go tonight.