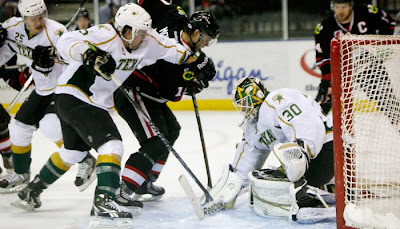 Andrew Raycroft stops a puck in this afternoon's game as Hubert Labrie blocks out IceHog Jeremy Morin. (Credit: Greg Hamil)
For the first time on the season, Texas failed to score a goal as simple but effective goaltending for Rockford got the job done this afternoon in Illinois. The 2-0 score is really deceiving as the game was closer than that. Both teams traded quality chances throughout the contest with both tenders getting solid stops.

Texas was outshot by the IceHogs 13-9 in the first period, but neither team could score as the teams traded power play chances but played mostly at even strength.

After taking the two penalties on the afternoon to that point, it was Brandon Svendsen breaking up the scoreless tie. Brandon Pirri threaded a puck through several Stars defenders and found Svendsen open alone on Raycroft's right side. He would not miss the open net to make it 1-0 for the Hogs. Texas gave the Hogs two more power play opps in the period, but neither would go for Rockford. Shots in the period were 11-8 for Rockford.

The Stars outshot the Hogs in the final period 16-10. It was a late period penalty by Angelo Esposito that put things out of reach for the Stars. With Esposito in the box, Jeremy Morin tallied his 9th of the year for the IceHogs and pushed the advantage to 2-0. Texas would get a late power play to go 6-on-4 with Raycroft on the bench, but it wouldn't come to pass.

Texas will travel to Chicago for a Wednesday night game before returning home for the weekend.