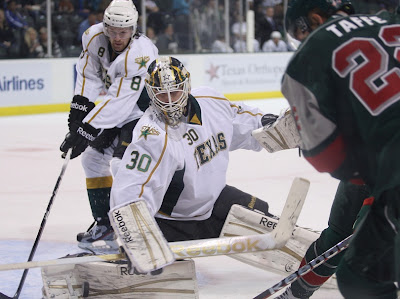 Andrew Raycroft is now 6-2-1 with Texas this season and a huge reason for the Stars rise in the standings. (Credit: Portraits by Deena)
Thanks to a determined third period effort and some silky smooth shootout moves, Texas went two games above .500 for the first time this season and put together a three game win streak for the second time this season. The win pushes the Stars to #10 in the West and a 6-2-1-1 mark in the last ten games. Stephen Schultz, Mike Hedden and Colton Sceviour got regulation goals and Andrew Raycroft had 22 saves and pushed his record to 6-2-1.

"It just shows how hard these guys work," said Coach Pyle. "Our goal was to get the two wins [this weekend] if we could. The effort these guys put together in these two games is nothing short of phenomenal. They just never quit.

Houston scored first in this one as Mike Radja collected his first AHL goal of the season. The Stars outshot Houston 14-7 in the period but did not score. "In the first, we weren't bad, but we weren't good either," said Pyle.

Radja got his second of the year against Texas in the middle frame as well. A bit of a scramble play, Houston ended up with two forwards on the goal line against zero Stars defenders, making the tap in goal an easy one for Radja. The Stars waited until the end of the second to start the comeback. Stephen Schultz scored his seventh of the year and third of the weekend on the 5-on-3 power play, just before the penalty expired.

"Schultz is a sniper. I need a righty out there to fit the chemistry of the power play. On the first power play goal, not too many guys can make that shot. He finds a way to get chances."

Mike Hedden scored his second of the weekend, a shorthanded goal, just eighty seconds later. The goal was scored off a rush that really started before the power play had begun for Houston with their player coming out of the box behind the play. Hedden's net crashing play was deflated a bit as Houston went up 3-2 on the ensuing power play only 30 seconds later.

The Stars needed a comeback in the third to make it to overtime in this one. It was Colton Sceviour on the power play, assisted by Max Fortunus and Jordie Benn. The winger's 8th of the year made it 3-3 and gave Texas a chance to get to OT.

Once in OT, Texas had a close call as Ryan Garbutt took a high sticking penalty and the Stars needed to kill a 4-on-3 chance to make it to the shootout. Once there, Andrew Raycroft and the Stars forwards paired up to bring home a W for the sellout home crowd.

"In the shootout, I'm kind of blind," said Raycroft, who stopped three of five shooters. "I don't know who these players are, so I'm just going out there to try and get in the way."

Colton Sceviour scored on his "signature" move, and Hedden and Garbutt also potted So goals to make the final score 4-3. Texas is now tied in the season series with Houston at 4-4-0-0. They now have a long layoff until their next game, Friday at San Antonio. The team will get two days off after playing 7 games in 11 days.

Texas captain Brad Lukowich blocked a high shot with his chest in the second period and did not return to the game. He was sent to get x-rays.

Coach Pyle shuffled Stephen Schultz to the third line in place of Luke Gazdic for much of the second half of the game. The fourth line played sparingly in the third period.

Today's attendance was 6,863, Texas's second sellout of the season.