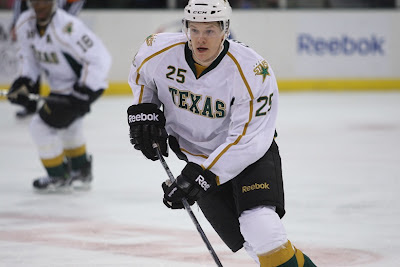 Just as Texas was hitting a stride, Dallas has been hit with injuries. Jake Dowell is out for the next week with an upper body injury suffered in last night's game at Montreal. Dallas has elected to recall Matt Fraser to replace him on the roster. Fraser had three goals this weekend against San Antonio and would have been a key piece for the Stars tonight in Oklahoma City and this weekend against Houston.

To replace him in Texas, the Stars have recalled forward Nick Layton from the Allen Americans of the CHL. Layton was signed to a standard player contract on July 19th, 2011, and assigned to Allen in the first round of cuts from camp on October 3rd. In 50 games, he has 13 goals, 23 assists, 20 PIMs and an even rating. This one-for-one trade leaves Texas again with only twelve healthy forwards.

The Dallas Stars announced on Wednesday that the club has placed center Jake Dowell on injured reserve with an upper body injury retroactive to Feb. 21 and recalled forward Matt Fraser from the Texas Stars, Dallas’ primary affiliate in the American Hockey League (AHL). The Texas Stars have recalled forward Nick Layton from the Allen Americans, the Stars’ Central Hockey League affiliate.

Fraser, 21, appeared in his first career NHL game earlier this season against Anaheim on Jan. 24. In 50 games for Texas this season, Fraser ranks second on the team in scoring with 42 points (26 goals, 16 assists). He leads the club with 26 goals and ranks fourth overall in goal scoring in the AHL. The 6-2, 207-pound forward was signed to a three-year entry-level contract by Dallas on Nov. 17, 2010.

Layton has played in 50 games for the Allen Americans of the CHL this season. During his time with the Americans, Layton scored 13 goals and added 23 assists for 36 points. The 23-year-old forward turned pro after playing the 2010-11 season at the University of New Brunswick, posting one goal and six points in 24 games played. In 2010-11, Layton joined the CHL’s Bossier-Shreveport Mudbugs for their playoff run. The right wing played in 20 playoff games, scoring seven goals and totaling 17 points to help the Mudbugs win the CHL’s Miron Cup.