Posted by Stephen Meserve on February 07, 2012
February 7th at 7:30 PM
Cedar Park Center, Cedar Park, TX
The club that knocked Texas out of the 2011 Calder Cup Playoffs returns this week for their only two games in Cedar Park this season. The realignment of moving the Milwaukee Admirals to the Midwest Division means only two home games against the Ads this season, and this year they fall on back-to-back nights.

Prior to Sunday's hard fought 2-1 win over Houston, the Ads were on a five game skid of their own, losing to Peoria (2), Rockford (2) and Chicago in that run. These two games in Texas give Milwaukee a chance to show whether the Houston win was a fluke or a trend. Texas is in a similar spot. Milwaukee is not currently a playoff bound team, giving the Stars a great chance to snap their four game losing streak and steal four points. 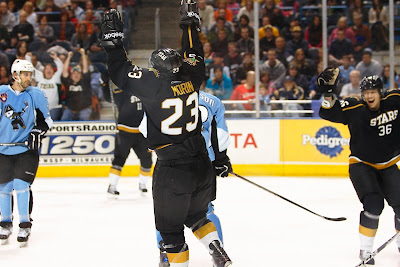 Jeremy Smith (18-14-1, 2.40 GAA, .911 SV%) has taken the lionshare of the load in net over the past month with Atte Engren only getting one start for the Ads since January 13th. It is also fair to note that Tyler Beskorowany has not gotten a start since January 8th at Rockford, his only start of 2012. Coach Pyle has not shown hesitation in starting Raycroft on back to back nights. Depending on how things go tonight, maybe Coach tries Beskorowany as a slump-buster. Raycroft's once sterline 6-2-1 record has dropped to 6-6-1 with the recent skid.

For Texas, the time is now. The Stars need 40 points in their remaining 33 games to keep pace with eighth. As it stands, the Stars can only afford eleven more losses on the season and still have to play 16 more games against the division. Texas is even on the season series (1-1) but has good luck against Milwaukee traditionally (11-5 all-time). There's no time like the present to start the comeback run.