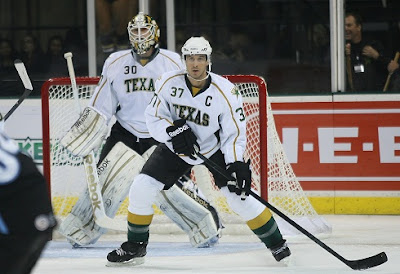 The Stars honored captain Brad Lukowich for his 1000th pro game in a pregame ceremony. (Credit: Portraits by Deena)
The Texas Stars broke a five game losing streak emphatically this evening with a 6-3 come from behind win over the Milwaukee Admirals. Texas allowed three first period goals but then roared back to score six unanswered, including three from Ryan Garbutt, to net the win. "It felt pretty good for the boys to come back like that from down 3-0," said Garbutt, who had the first regular season home hat trick in Stars history.

Coach Pyle was extremely impressed with the character in the comeback win. "You're down by three and you say 'Oh no, here we go again', but they had a lot of character and battled back. That's what I love about them."

Scott Glennie had a goal and two assists and Adam Pardy added three assists in the last game of his conditioning assignment.

Milwaukee got the jump on Texas as Kyle Wilson cut across the crease, collecting his own rebound and sending one past Raycroft from the left side. It was Wilson's 12th of the year, coming at 5:12 of the period. Milwaukee would add two more in the first Zack Stortini potted his 7th of the season off a fat rebound that flew out to the hashes and was subsequently buried from the right wing circle.

Texas got in penalty trouble late in the period as a slash from Tousignant and a salsh and a hook from Raycroft put them on two 5-on-3s. Texas would survive one but didn't survive the other, allowing their third goal of the game to Chris Mueller.

The Stars came back in the second with a great effort. Sceviour went first as he accepted a cross-ice pass from Scott Glennie and ticked one off Jeremy Smith's glove and into the net for the Stars' first goal. Ryan Garbutt was up next with a slick five-hole marker coming down the right wing side. Scott Glennie performed an excellent give and go off a Pardy pass to break Garbutt free. Texas closed the period down only 3-2 but with a 27-19 shots advantage.

The third period was all Texas as they completed the comeback in fine fashion. Ryan Garbutt got it started with his second of the night. Smith was screen by his own defender and never seemed to see Garbutt's shot from the top of the circles gloveside for the three all tie.

Matt Fraser went next as Travis Morin found him cherry picking past the Ads defense. Fraser went backhand, forehand, and potted his 22nd of the season for the 4-3 lead. Past that, it was all gravy. Scott Glennie tapped one out of midair to make it 5-3 with 6:45 left in the third.

Milwaukee would pull Jeremy Smith for the extra attacker and that's where Ryan Garbutt got his hat trick. Garbutt's empty netter made for the first home regular season hat trick in history and the first hat trick of the season.

Overall, it was a great night for Texas to break the losing streak. However, only just five points out of the playoffs, Coach Pyle isn't looking at the standings. He is concentrating game by game, starting with the next one in Rochester on Friday.