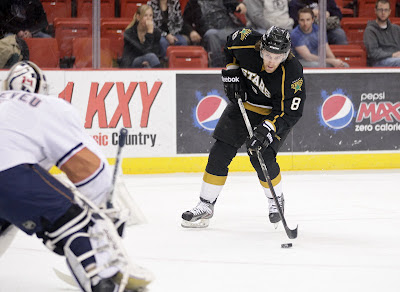 Benn scored the only goal of the night for Texas. (Credit: Steven Christy)

Texas started out strong in Oklahoma City, looking like they would get the best of the Barons, but ended the night with another L. After a first period power play goal by Texas, the Barons scored the next five straight for a 5-1 final. Andrew Raycroft started the game but was pulled in favor of Beskorowany after allowing four goals on 18 shots. Beskorowany stopped 16 of 17. Jordie Benn scored Texas's only goal.

In addition to the Stars' goals against trouble, Maxime Fortunus was in street clothes by the third period with what was being called an upper body injury. It is not expected that he will be available for the weekend.

The game started physically with Kirill Tulupov delivering a hard check to a puckless Mathieu Tousignant. Every Star on the ice descended on Tulupov with Nick Layton getting there first and taking him to task. Tulupov received a major for interference and Texas made them pay up, scoring on the PP. Jordie Benn broke into the zone unaccosted and beat LeNeveu clean for the 1-0 lead.

Texas looked like they would go the break with the lead in tact but a 5-on-3 power play gave OKC its first of the night on a Arcobello shot that tipped off Lukowich's stick. Within five minutes of the first, the floodgates were open and the Barons added two more goals for a 3-1 lead. Keller had a slow roller dribble in 1:19 into the second and Helmer got a tip by Teemu Hartikainen three minutes later.

Mark Arcobello scored his second of the night at 12:25 and ended Andrew Raycroft's night after four unanswered. Triston Grant would add another in the third to rub a little salt in the wound.

Texas can afford precious few more losses before the season has officially slipped away. Without a weekend sweep of Houston, things are very dicey in the playoff race.