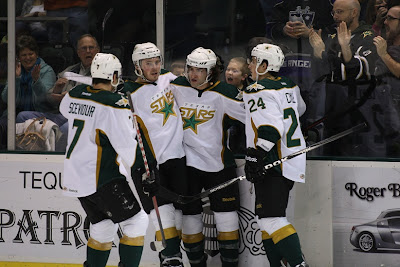 Angelo Esposito's first period tally and two more in the third couldn't get Texas past Charlotte tonight in Cedar Park. (Credit: Portraits by Deena)
Despite a third period rally by Texas, Charlotte set the Stars to a four game losing streak this evening in Cedar Park. The effort was rather disjointed for the Stars, Coach Pyle admitted. "We missed four or five open nets, and the power play was sloppy. In our D zone, we should have been better. We had opportunities, but we didn't have finish." Texas got goals from Esposito, Garbutt and Morin, but couldn't overcome in the final minute with the extra attacker.

Discipline was a big factor in the game as a boarding major in the second was negated by a roughing minor from Ryan Garbutt, who has had issues with retaliation this season. "I didn't like the penalties by Garbutt. We have to be more disciplined."

"The self discpline of shutting your mouth, doing your job and staying out of the penalty box: that's a big part of the game. That's probably the most important trait any player can have. That's where some of these guys struggle, that's been Garbutt's biggest problem."

Charlotte got things started in the first period with Zac Dalpe's eleventh of the season, assisted by Chris Terry and Nate Blanchard, a wrist shot from the right wing circle. Texas tied things up before the end of the period with a great effort by Angelo Esposito. Esposito slipped the puck from forehand to backhand and beat John Muse through the screen of his own defenseman for a five-hole goal, his third of the year. The low shot count in the first was led by Texas 6-5.

Texas got a chance on the power play in the second with the aforementioned boarding call on Boychuk. Ryan Garbutt took two minutes off the power play with a retaliation roughing minor on the play. Travis Morin, one of the more veteran players on the team, talked to the difficulties of keeping a level head postgame.

"Sometimes you get caught up in the moment. My mom got on me about it, 'I don't pay to watch you sit in the box.' It's hard for some guys to do. It's stuff we can't afford right now when we're struggling."

Charlotte got a goal from Jerome Samson in the third on a play where the D got caught deep and forwards were covering. Charlotte pushed further ahead in the third with a second goal from Samson just 85 seconds into the third.

Texas climbed back into the game twoard the end of the third as Ryan Garbutt's bad angle shot beat John Muse on the far side of the net for a 3-2 mark. With two men in the box, Texas's Travis Morin scored a special 3-on-5 shorthanded goal on a great individual effort. Morin said that he only remembers one other 3-on-5 goal in his career, once in his time with the South Carolina Stingrays in the ECHL.

A few crossbars and empty nets were missed in the last few minutes of the game as a feverish effort from Texas kept fans on their seats but ultimately disappointed. The Stars are in action again on Tuesday against the Admirals.

Fraser participated in morning skate but was held out of the game tonight. It is nothing major, likely something similar to his unexpected scratch earlier in the season.