Stars Get Gritty 5-4 SO Win at Home 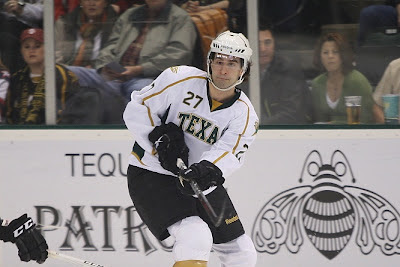 Angelo Esposito had two assists in tonight's game against his former club. (Credit: Portraits by Deena)
Texas needed extra time to do it but finally broke out of their three game losing streak with a physical 5-4 shootout win in Cedar Park this evening. "We wanted to do everything we could to get out of the slump tonight," said Coach Pyle. "We played a full sixty tonight." Texas got goals from Schultz, Wathier and two from Fraser, including two power play tallies. Angelo Esposito and Travis Morin picked up two assists each. "Esposito's played well since he got here," said Pyle. "He made a great play on the power play and snaps the puck pretty well."

This was an important game for playoff positioning. Texas is not out of it completely. "We were playing just well enough to lose on the road."

Tyler Beskorowany picked up a good confidence win as well, allowing four goals on 32 shots but stopping all five in the shootout.

The first period saw three goals for the two clubs among four fights and a match penalty. Francis Wathier laid out Mark Cullen in the offensive zone, drawing the ire of captain Nolan Yonkman. San Antonio opened the scoring just thirty seconds later with Michael Repik's backhander five-hole in tight on Beskorowany. Matt Fraser squared off for his second fight of the year, this time with James Wright just a minute later.

Texas got things back to even with a power play goal from Stephen Schultz off a nice round-the-back pass from Angelo Esposito. Shortly thereafter, Nolan Yonkman took his second fighting major of the night with a tilt against Luke Gazdic. Evan Barlow put the Rampage ahead at 14:49 of the first, finishing off a nice pass from behind the net for a 2-1 score.

Bracken Kearns got the fourth and final fight of the period as Brenden Dillon took him to task for a high hit on Stephen Schultz. Schultz left a pool of blood on the ice and would not return to the game. Coach Pyle said after the game that Schultz broke his wrist, but surely there was a head element to the injury as well. Kearns earned himself a match penalty for the hit that will surely get attention from the league.

On the ensuing power play, Texas got even with Francis Wathier scoring on a net-front scramble to make it 2-2. Former Star Greg Rallo scored his twelfth of the year just past six minutes in, banking one in off the crossbar from the right wing circle. Matt Fraser evened things up again on a gift from the San Antonio defense, receiving a perfect pass in front of the net and scoring on DGM low stick side for the 3-3 tie.

Texas started the third with a bang as Angelo Esposito bombed one on net, popping the puck off DGM's pad to Matt Frser, who made no mistake scoring his second of the night. Texas kept San Antonio down for most of the period, but Roman Deryluk tied things up with 2:28 to go to send things into overtime.

With a scoreless OT period, the game went to a shootout, where Texas was 1-2 on the season and San Antonio 4-0. Texas's Beskorowany stopped all five San Antonio shooters in grand fashion, each time to greater screams from the crowd. Mike Hedden scored the Stars' only goal of the shootout, snapping one past DGM from the hashes.

Dan Spang was out tonight with a day-to-day injury of non-specific nature. Coach Pyle expects him back mid-week. Hubert Labrie is more of a week or longer situation.

Coach Pyle is hoping to pick up another forward before tomorrow's game with Schultz out "for a while". With no forward scratches, Texas is down to eleven healthy forwards. They can roll eleven tomorrow night, but they would rather not.