Stars Sweep The Weekend With 4-2 Win 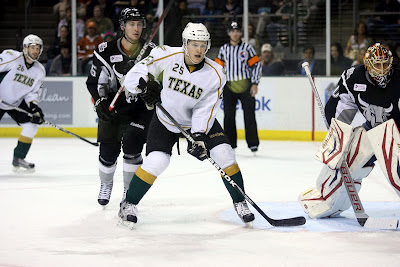 Matt Fraser had the game winner in tonight's game an three goals on the weekend. (Credit: Portraits by Deena)
Texas needed four points on the weekend to stay in the playoff chase and they got all four thanks to tonight's 4-2 win over the Rampage. Coach Pyle already has the team in playoff mode. "This is our playoffs. We did everything possible to win. That effort has to be from twenty guys every single night."

Texas got goals from Fortunus, Sceviour, Fraser and Hedden in the game and rallied from a 2-1 deficit to score three unanswered in the third period. "We're a desperate hockey team right now and that's when we're most dangerous," said game winning goal scorer, Matt Fraser. "We really feel like we have a team that can make some noise."

The first period was far less eventful than last night's four fight fracas. Texas had three power play opportunities, including a 5-on-3 opp to end the period. Maxime Fortunus snuck down low and blasted one from the hashes to beat Markstrom high on the stick side off a Morin pass.

San Antonio answered to start the second period as Texas failed to clear a puck and, on the rush out of the zone, left Greg Rallo uncovered on the left wing side. He banged home a rebound for his thirteenth of the year and the tie game. To start the third, San Antonio got on the power play and broke an 0-for-12 streak on the PP with a Bill Thomas goal off a broken play in front.

"We played hard in the third of a lot of games and not finished," said Coach Pyle. "This win was a little bit of confidence. The effort was second to none."

The rally began with Jace Coyle snapping a shot to the net off the rush that Colton Sceviour tipped to tie things at two each. Matt Fraser scored the eventual game winner, again off the rush, with Angelo Esposito slipping one over to the streaking Fraser down the right wing side.

"Markstrom is such a big goalie that you want to get the puck off as fast as you can," said Fraser. "I didn't even look; I just tried to get it off."

The puck beat Markstrom stick side high for the 3-2 lead. It was a strong play by Fraser, but he was quick to deflect praise even as he approaches the franchise goal record of 27 (Gagnon 09-10, Rallo 10-11).

The Stars survived the last seven minutes of the period with San Antonio makes several spirited rushes up the ice. Newcomer Scott Campbell had a game-saving play in the crease as well, gloving a puck down and clearing it out. He should have been credited with a save on the play.

"Everybody contributed," said Pyle. "It was a really great weekend."

With Markstrom pulled, Texas's Morin poked a puck past the point man and Mike Hedden potted his eighth of the season into the empty net for the 4-2 final.

After sweeping the San Antonio Rampage's visit to the Cedar Park, Texas travels to Oklahoma City for a Wednesday night game against the Conference-leading Barons.