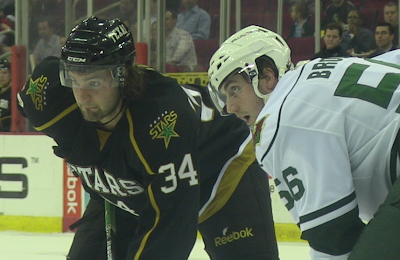 The Stars scored first but the Aeros scored three unanswered afterwards to put Texas below .500 and hand them a three-game losing streak. Andrew Raycroft stopped 32 of 34, and Ryan Garbutt got the only goal of the night for the club from Cedar Park. Houston's win broke up their six game winless streak in fine fashion. The Stars are back in action on Saturday against Charlotte at the CPC.

Texas started off the scoring in the first period with a tip from Ryan Garbutt beating Matt Hackett off the initial shot from Angelo Esposito. Texas had a shots advantage for most of the period but Houston scraped back to hold a 10-8 mark after 20.

The Stars gave up the lead in the second period with an unassisted tally. Casey Wellman pounced on a puck mishandled by Andrew Raycroft for his 14th of the season. The goal came during four-on-four after Texas pulled themselves off the power play with a goaltender interference call.

The third period saw Houston pull ahead on the power play, their third chance of the night. Chay Genoway found twine, assisted by Fontaine and Wellman, to set the Aeros at a 2-1 lead. The Aeros would get another in the form of an empty net goal to win by a final mark of 3-1.