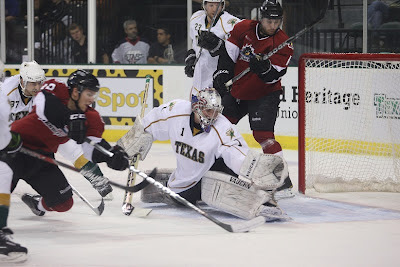 Campbell stopped all 30 he faced for his first pro shutout. (Credit: Portraits by Deena)
It was the Jack Campbell show tonight in Cedar Park. Campbell had thirty saves en route to his first professional shutout. Campbell deflected praise as deftly as pucks, though. "The guys in front of me came out and took care of business," said Campbell. "We wanted to get the fans a win tonight."

Texas got goals from the players who have been here all year in two from Fraser and one each from Gazdic and Hedden. "The young guys are energizing us," said Luke Gazdic. "They've got legs for days." Gazdic also pointed to the fan support as a huge motivator for the players tonight.

"The fact that we still have 6,000 plus fans coming out to support us. It was a great crowd. For us to think it was loud, it's rockin' in here."

Texas did a lot of damage in the first period, scoring three on fifteen total shots. Mike Hedden got things started for the Stars with a wrap-around goal just under seven minutes in. It was his 15th of the year and his fourth in the last five games.

The Stars closed the period strong with two goals in the last two minutes. Matt Fraser went first, one-timing a puck from the right wing circle for his 32nd of the year. Austin Smith made a great cross-ice pass to find Fraser; it was Smith's second assist of his short career. You can see his skill as a playmaker evident on the ice. Vision and strong passing are going to be two of his best assets as he moves forward into next season.

Finally, Luke Gazdic polished off great rush up the ice from Travis Morin with a wrister low stickside on Desjardins to make it 3-0. Shots were 15-9 after one and Texas was rolling.

The Stars earned four power plays in the second period but still could not budge the score from their 3-0 mark. Lake Erie only managed five shots in the middle frame, no doubt hurt by the power plays. Texas managed 11.

Matt Fraser got his second of the night to open the third period. Coming down the right wing side, Cameron Gaunce screened his own tender as Fraser ripped a shot over Desjardins' left shoulder. Dan Spang and Brenden Dillon picked up assists on Fraser's 33rd goal of the year.

From there on out, Texas took it's time and picked its spots for offensive rushes, trying to maintain Jack Campbell's first professional shutout. The Stars killed a four minute minor late in the third and the crowd was on its feet for the last thirty seconds, cheering on the team.

Jack Campbell showed tonight why he was a first round pick. His lateral movement and fundamentals are incredibly sound. Texas fans should enjoy him while they can because he is the future in Dallas.