Posted by Stephen Meserve on March 25, 2012
March 25th at 2:00 PM
Ricoh Coliseum, Toronto, ON
Texas rolls into Canada for one final time on the regular season today. Toronto is a high flying club in the Western Conference, having surged to second place around the mid point of the campaign and never looking back. They are shoe-in for the playoffs at this point. 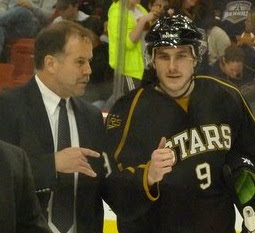 Texas will start Jack Campbell in his second pro game. Word from Dallas says that the Stars are looking to start Campbell in as many games as possible down the stretch. Except for the three in three on the final weekend, that means that Campbell could start practically every game. He had a good start in OKC, but that team is a dominant one. The schedule doesn't relent though as Toronto is #2 in the conference.