Posted by Stephen Meserve on March 16, 2012
March 16th at 7:30 PM
Cedar Park Center, Cedar Park, TX
Despite only having a month left in the season, Texas still has just under half of their season series with the Oklahoma City Barons ahead of them. Texas will play OKC twice this weekend, next week in Oklahoma and in the last home game of the season on April 14th. Texas is 2-4-0-0 in the series, which is surprising given the Barons' mastery of the league this season.

The Oklahoma City Barons are a perfect example of the adage that you don't win the Cup in October, but you certainly can lose it. They've ended up on the right side of that equation though as a strong early season is helping to keep them afloat and in the first slot no less despite recent struggles. In the last 10 games, the Barons are 4-3-2-1. They have failed to put together back-to-back wins since February 9-11 and haven't gone on a three game streak since ending their seven game streak on February 3rd. 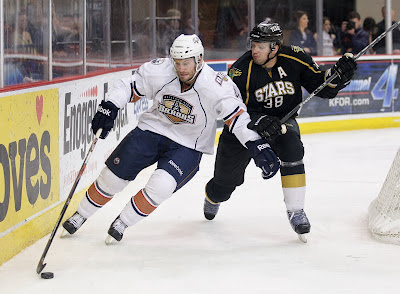 Some of that can be chalked up to the absence of Yann Danis, who is one of the best goalies in the league this season and spent a good chunk of time with Edmonton these past few weeks. David LeNeveu is not a bad goaltender by any means; Danis is just a hair better. Danis, however, is day-to-day with a sore knee. Olivier Roy joins them from Stockton of the ECHL to backup LeNeveu.

OKC blogger Neal Livingston wrote about the March swoon on his blog in a post titled "There's Something About March," partially quoted below:

"You can blame goaltending, which indeed has come down to earth. You could blame the loss of Ryan O’Marra and the head-scratching induction of Bryan Rodney. Perhaps it’s the line shakeups that occur when the Oilers infuse the Barons with “NHL caliber players”. Maybe it’s coaching. Maybe it’s fatigue. Maybe it’s a team that is due for a dip, and dip you dip we dip is occuring. I have reason to believe that this Barons team plays with too much pride, too much determination, and too much grit to let a slump continue. But one has to wonder, why now? Why here? Why March?"

More on that front at his blog.

Calder Cup winner Ryan Keller leads the way on offense with 18-26-44 and #4 scorer Teemu Hartikainen is out this weekend, up with the NHL's Edmonton Oilers.

In the Stars's last two games, Matt Fraser set and extended his hold on the franchise scoring record. Fraser is on a three game goal streak coming into tonight's game.