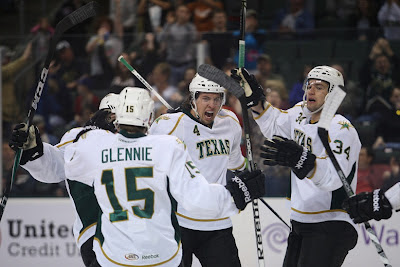 Brenden Dillon's first period goal was one of only a few bright spots for the Stars tonight. (Credit: Portraits by Deena)

The return trip to the Cedar Park Center for the Grand Rapids Griffins went just their way, as they got revenge over the Stars for their OT loss a week ago with a 5-2 regulation win tonight. Texas got down early, allowing two goals in the first five minutes, and never really recovered in the game. "You either have bounces with you all game or you don't, and we obviously didn't," said Colton Sceviour.

Team commitment to defense was a big issue in the game as Texas allowed numerous odd-man rushes. Tyler Beskorowany deserves credit for the score not being 10-2 given the "sloppy" play in front of him. "I'd just like us to take a step forward and take care of the puck better," said Coach Pyle. "We need a commitment there and we don't have it."

"Even though we're shorthanded, it doesn't matter. You have to find ways to make it work," said Pyle. "If you're missing offensive guys in your lineup, you have to play better defensively."

Former Stars Fabian Brunnstrom and Chris Conner scored 28 seconds apart to start the Griffins' good night three minutes into the game. Texas answered back with Brenden Dillon's fourth of the year just 30 seconds later. It came as he snuck down from the point to bang home a rebounded puck from the slot.

Grand Rapids would score again in the 12th minute of the game with Tomas Tatar scoring on a bit of an off-speeder that change directions on its way in from the point to beat Beskorowany.

Matt Fraser scored his 29th of the year halfway through the second period, finding a loose puck in the blue paint off a Jace Coyle slapshot. The lead was cut to one and Texas found itself on a 5-on-3 power play thanks to penalties to Conner and Raedeke. Texas would fail to convert, however, ultimately going 0/6 on the power play on the evening. "We had opportunities but we just missed them," said Pyle.

With the momentum seemingly in their favor, Texas allowed Grand Rapids' fourth of the game 16 minutes into the second. "We tighten it up a little bit but then we shoot ourselves in the foot," Pyle added. Brunnstrom's second of the night and tenth of the year came on the power play and set the score at 4-2.

Grand Rapids added another in the third on a 5-on-3 power play after a double minor for high sticking to Dan Spang and a roughing minor to Luke Gazdic in the final five minutes.

Angelo Esposito has a stiff knee, according to Coach Pyle. He was given the game off.