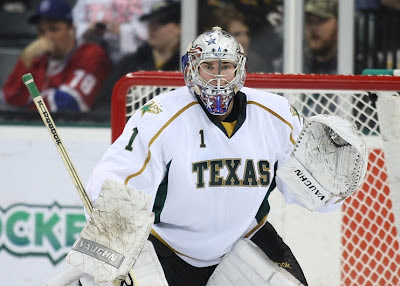 The first home game for many of the newest Texas Stars started with promise but ended in a 4-2 loss to the visiting Hamilton Bulldogs. Texas opened up a two goal lead through the first half of the game but ceded ground with four against in the back half of the contest. Jack Campbell, who earned the #2 star for the third straight game, stopped 36 of 39 and was the only reason Texas had a lead at any point in the game.

"Jack's work ethic is inspiring," said Coach Pyle. "He kept us in this one for sure."

ATO signees Austin Smith and Taylor Vause each had a primary assist on the Stars' goals this evening. Travis Morin and Luke Gazdic were the goal scorers.

The Stars opened the scoring in the first with a goal by Travis Morin on a two-on-one. Morin looked off Fraser and went shot all the way after accepting a give and go pass from Smith at the blue line.

The fourth line popped in a goal for Texas in the second as Luke Gazdic and Taylor Vause scored on another two-on-one. Vause chose to pass to a streaking Gazdic, who fired it past Mayer for the 2-0 lead. "Vause does little things well," said Pyle. "That was a big goal from our fourth line." It would be Texas's last goal of the game, however.

Travis Novak started the Dogs' rally with his first of the year at 13:09 of the second. Texas carried their 2-1 lead to the second intermission.

The third doomed the Stars as a power play goal from Gabriel Dumont came off a bad bounce in front and tied things up. In the dying minutes of regulation, it was Joonas Nattinen finding twine against Texas with just 76 seconds left. The Stars attempted to mount a comeback but ultimately ceded an empty net goal to seal the loss.

Coach Pyle was encouraged by the play of the new Texas Stars. "They all work hard and bring energy. They need to learn the league, but the only way they'll do that is by getting ice time."

Austin Smith is looking more comfortable with the league by the game, as is Taylor Vause. Vause now has a goal, assist and shootout tally in his four games with Texas. Chiasson is getting used to the league, but there were glimmers of what his future potential may be with sagacious plays in the offensive zone and a few blistering shots.